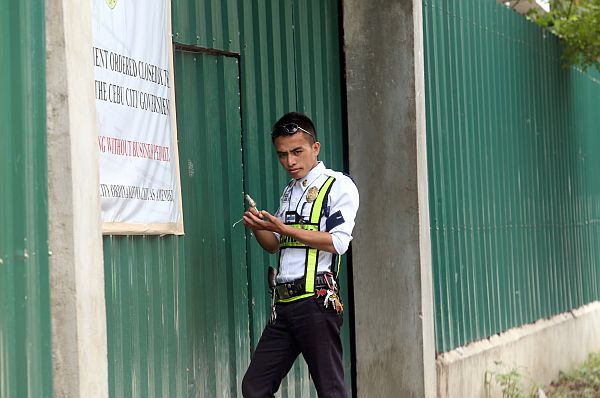 A security guard tightly screens visitors at the Rico’s Lechon commissary in Barangay Talamban and jots down the plate number of a CDN vehicle outside the area.
CDN PHOTO/JUNJIE MENDOZA

IT ISN’T just Cebu City Hall that is going after Rico’s Lechon.

The Environmental Management Bureau (EMB) of the Department of Environment and Natural Resources (DENR) 7 is also in pursuit of the company after it found that the Rico’s commissary in Barangay Talamban has been operating without an Environmental Compliance Certificate (ECC).

EMB-7 regional director William Cuñado said the absence of an ECC was discovered early this year after the bureau intensified a campaign to clean up Butuanon River which partly runs right behind the company’s commissary.

Cebu City Mayor Tomas Osmeña earlier said in a Facebook post that the commissary had been releasing wastes, including pig’s blood and feces into the creek.

As it turns out, this was also the suspicion of EMB-7.

(Where else would their wastes go? It’s not like it will go to another creek. It will really be released there.)

Aside from having no ECC, Cuñado said the commissary also had no waste discharge permit from their office.

At least two notices were sent by EMB-7 to Rico’s Lechon earlier this month for them to comply with the requirements, said Cuñado.

However, the first notice was not answered by the Rico’s management which also failed to show up in a technical conference scheduled by the EMB earlier this month.

The second notice to the commissary has set another technical conference this September 6.

Failure to attend the conference will mean a “love letter” or a closure order from EMB-7 against the establishment, said Cuñado.

The commissary was ordered closed by City Hall last August 18.

When a CDN team visited its premises yesterday morning, a City Hall tarpaulin posted at the gate of the commissary declaring that the business has been closed, hang — while people were seen coming in and out of the compound.

Beside the commissary are several houses made of light materials.

Lolit Canoy, 49, a resident in the area, said that they would notice a foul smell coming from the creek behind the commissary every time it rained and the river started to rise.

(It would really smell when there is heavy rain. It would smell like sewage and septic wastes. The river water also turns dark. The stench would usually last for one to two hours)

After the rain, she said, things would return to normal.

Canoy sees no problem with the operation of the commissary in the area as there are other piggeries and slaughterhouses atop the river and the stench, she said, may have come from there too.

Last August 3, two of the company’s restaurants in Barangay Mabolo and Escario St., respectively were also shut down by the mayor for operating without a business permit from City Hall.

Osmeña said that aside from not having a business permit, the commissary also did not have a barangay clearance, a sanitary or health clearance, fire safety inspection certificate, environmental compliance from the Cebu City Environment and Natural Resources Office, SEC and Articles of Incorporation, Contract of Lease or Tax Declaration, and Certificate of Property Holdings, among others.

The family of Enrico “Rico” Dionson, who owns the business had claimed that “personal vendetta” was what prompted Osmeña to close down the business after they told Bea Villegas-Osmeña, the mayor’s daughter-in-law that they were ending their business partnership with her.

Read Next
1 dead, 7 down after eating fish