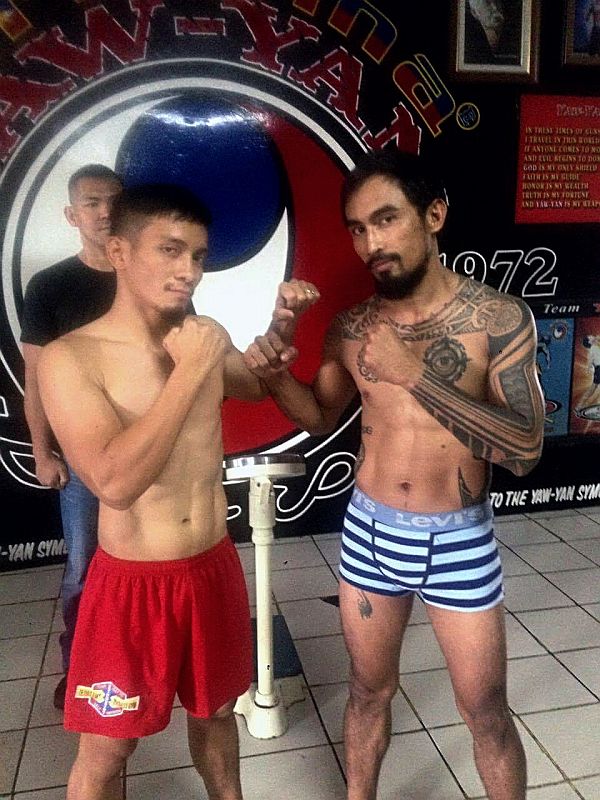 Tonix Borres (left) and Cipoz Guadez put on a fighting pose after the official weigh in of CEFL 2: Respect which unfolds tonight at the Cebu Sports Institute.
/CONTRIBUTED PHOTO

“I will do my best inside the cage to keep my unbeaten record. I want to go professional, but for now, I am focused on this fight,” said Borres.

“This is a battle of fighting styles. Who gets to impose his game plan wins,” said Yaw-Yan ArDigma CEO and Founder Master Benigno ‘Ekin’ R. Caniga, Jr. during the official weigh-in yesterday at the YawYan ArDigma headquarters in downtown Cebu. “Expect fireworks in the ring when these two fighters collide tomorrow (tonight).”

Borres and Guadez both weighed 135 lbs.

“I feel that the entire Cebuano jiu jitsu community is pinning their hopes on me because we want to prove that jiu jitsu is the supreme martial arts,” said Guadez. “I am the underdog in this fight and that gives me less pressure and an added motivation to win.”

In the equally-exciting supporting main event, Nigerian Simon Uchenna of Yaw-Yan ArDigma, will try to outmuscle knockout artist Rodel ‘Pitbull’ Valisado of Tatus Muay Thai and MMA. Uchenna weighed in at 178lbs while Valisado tipped the scales at 202lbs for their middleweight showdown.