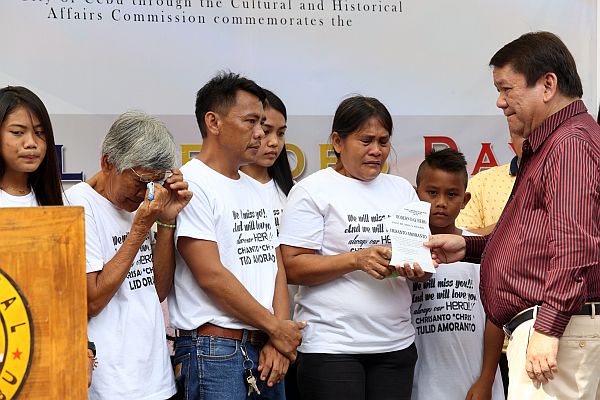 While paying homage to the heroes who died in the fight for freedom and independence in years past, Cebu City Mayor Tomas Osmeña said it is also important to honor the deeds of living heroes.

A plaque of recognition was given to Mary Joy Tabal, who gave the Philippines its first gold medal in the women’s marathon at the 29th Southeast Asian (SEA) Games in Kuala Lumpur, Malaysia.

A posthumous modern-day hero award was also handed to the family of the late Crisanto Amoranto, who was shot dead after helping a woman fend off robbers last July.

“(Tabal is) an inspiration to all of us because she’s teaching us how to be a winner,” the mayor said in his speech.

Osmeña said one does not have to die in order to be recognized as a hero.

In her speech, Tabal said she was honored and humbled by the city’s recognition of her latest achievement.

She said she sees it as a responsibility to be a role model and to continue being an inspiration to the younger generation.

Tabal also said she is motivated by the recognition given to her by the city and she will work harder to be better.

“Let’s continue dreaming, let’s continue believing and let’s make Cebu a place where champions are made,” she said in a speech.

Tabal said she dedicates the award to all who supported her career since day one. Her father Rolando Tabal Sr. said he could not contain his gratitude for his daughter’s achievements.

Mayor Osmeña also gave recognition to all the people who text and message him on Facebook reporting drug pushers in their communities.

He said he receives 100 to 300 texts reporting illegal drugs operations all over the city.

“These are people that will never be recognized. In so many ways, these are selfless people. They are sacrificing and reporting. Without that, our drive against illegal drugs is useless. These are the heroes of today,” the mayor said.

Yesterday’s celebration was attended by councilors under the Bando Osmeña-Pundok Kauswagan (BO-PK) along with Rep. Raul del Mar of Cebu City’s North District.