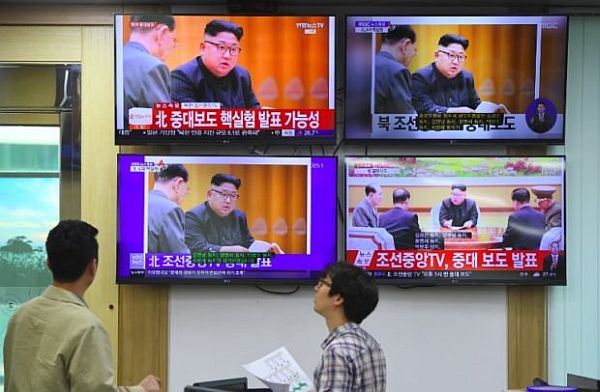 North Korea declared itself a thermonuclear power on Sunday, after carrying out a sixth nuclear test more powerful than any it has previously detonated, presenting President Donald Trump with a potent challenge.

The North has tested a hydrogen bomb with “perfect success,” a jubilant newsreader announced on state television, adding the device could be mounted on a missile.

The test was of a bomb with “unprecedently large power,” she said, and “marked a very significant occasion in attaining the final goal of completing the state nuclear force.”

The broadcaster showed an image of leader Kim Jong-Un’s handwritten order for the test to be carried out at noon on September 3.

The announcement came after monitors measured a 6.3-magnitude tremor near the North’s main testing site, which South Korean experts said was five to six times stronger than that from the 10-kiloton test carried out a year ago.

Hours earlier, the North released images of Kim inspecting what it said was a miniaturized H-bomb that could be fitted onto an ICBM, at the Nuclear Weapons Institute.

Hydrogen bombs or H-bombs — also known as thermonuclear devices — are far more powerful than the relatively simple atomic weapons the North was believed to have tested so far.

Japanese Prime Minister Shinzo Abe said ahead of the announcement that a test would be “absolutely unacceptable.”