Bringing the colors back to Marawi 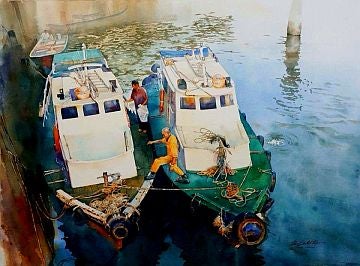 Forty-six artists banded together to let go of 83 paintings closest to their hearts and become part of “Watercolor for Life,”
a painting-for-a-cause exhibition for the rehabilitation of Marawi.

The exhibit, which will run until Oct. 1, is a “heart work” of former World Vision staff and former World Vision-sponsored child Ethelrida Camiguin Pajao, who came home to Cebu four months ago after residing in Singapore for 10 years.

In introducing this event, Ethel quoted a question from the book “Art as Therapy” (by Alain de Boton and John Armstrong) which asks “When does a work of art become successful?”

The answer, which is in the book itself, goes: “When it manages to foreground the elements that are valuable but are hard to hold on to.”

What was initially planned as a birthday celebration and homecoming party evolved into an art exhibit which placed the watercolor medium on the spotlight.

While many artists refer to watercolor as the most difficult medium, Ethel and her Artkada friends including doctor-artist Nanette Catigbe, who attend art jams or tambays with her, embraced the intricacies of watercolor in creating beautiful masterpieces.

From the vision of a lone woman who just started her watercolor journey less than two years ago, Watercolor for Life was born to rebuild the lives of women, children and their families in Marawi.

The lobby area of Radisson Blu Cebu was transformed into an art hub during the launching day on Aug. 27 as Cebu’s art legend Kimsoy

This was followed by a portrait watercolor demonstration by architect Dino Dante Pajao of DE’s Artroom, a two-year-
old Cebu-based distributor of premium art materials.

Dino is Ethel’s husband and together they contribute to nation building through the arts.

“Everything that we have here is God-given. I’m thankful to Radisson Blu for being our partner in this event,” she said.

The artists who participated in this exhibit were asked to give up paintings which are close to them so this is really a meaningful event,” she added.
Sixty percent of the sales proceeds will go to World

Vision Philippines, the event’s partner in bringing relief and rehabilitation efforts in Marawi.

“We are currently firming up plans on how to rebuild Marawi. We are assessing actual recovery needs. By being here, we are bringing Marawi back in the discussion because it seemed to be covered by other issues these days,” she said.

He said the former was his first watercolor painting of a fish while the latter wasa painting that served as reminder of a girl from his high school years.

“Those paintings evoked life and they were parts of my life that made me the person that I am now. The paintings are close to my heart but it was not hard to let them go because I knew it will go to a cause that will rebuild the life of people,” shared the 27-year-old Mandaue City-based artist.

Licensed chemist Wilbert Wee said he gave up three paintings entitled “See No Evil,” “Hear No Evil” and “Speak No Evil” which depict the
responses of some individuals to issues and realities surrounding us.

“We sometimes choose to be blind, deaf or silent on these issues but we are still affected because we are part of one country, ” he shared.
He said helping others may not come easy to some people because they do not know how or where to start.

“In my case, I only have my skill or talent to share through organizations who have the same goal as me. Joining groups (like Artkada) is easier because it channels aid to those who need,” said Wilbert.