For the love of Mary 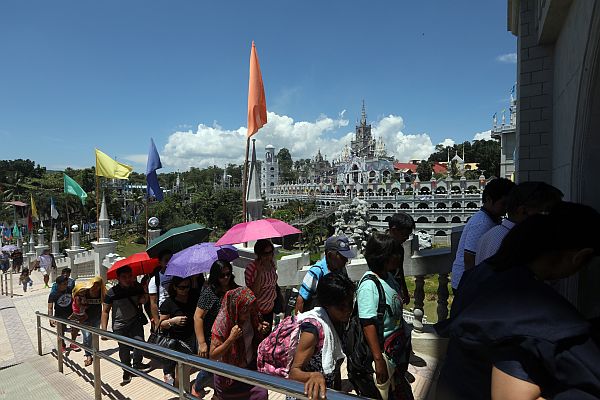 Marian devotees and tourists flock to Our Lady of Lindogon Shrine in Barangay Simala, Sibonga town, south of Cebu where an image of the Blessed Virgin Mary is installed inside the majestic Monastery of the Holy Eucharist or Simala Church. Thousands are expected to visit the popular pilgrim site today, September 8, to celebrate Mother Mary’s birthday or the Feast of Her Nativity.
CDN PHOTO/TONEE DESPOJO

FEAST OF HER NATIVITY

For years, 69-year-old Teresita del Rosario has had problems with her vision.

She was found to have glaucoma, a disease that destroys the optic nerve and cataract, which has clouded her natural lens.

Badly wanting to be healed, the mother of seven traveled all the way from Pasig City to Sibonga town, 56 kilometers south of Cebu City, to visit a popular pilgrim site, the Our Lady of Lindogon Shrine, in the hills of Barangay Simala.

Del Rosario did not mind the distance, firm in faith that she will be healed by God through the intercession of the Blessed Virgin Mary.

“Mahirap may sakit. Hiling ko sana ni Mama Mary na pagalingin niya ako. Gusto ko gumaling ang mga mata ko (It is hard to be sick. I want to ask Mama Mary to heal my eyes),” she said as tears welled up in her eyes.

Del Rosario also prayed that her granddaughter be cured from a kidney disorder and eventually bear a child.

Though born in Mandaue City, Cebu, it was Del Rosario’s first time in Simala as she grew up in Pasig. She was accompanied by one of her children and some grandchildren in her trip to the shrine. 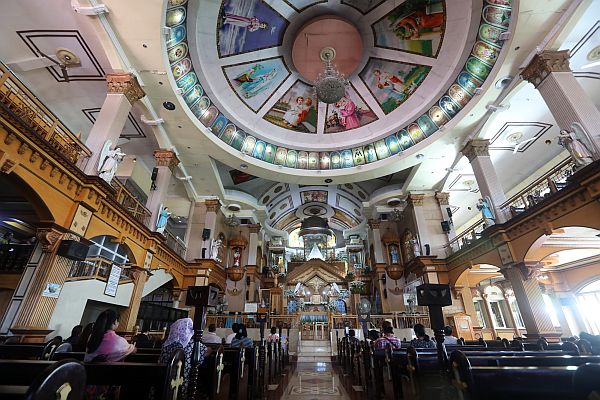 The image of the Blessed Virgin Mary enshrined at Simala Church was brought to Cebu in 1997 by the Marian Monks of Eucharistic Adoration (MMEA) or six years after a mysterious woman reportedly gave the image to the monks for safekeeping at the height of the 1991 Mt. Pinatubo eruption in Pampanga. (CDN PHOTO/TONEE DESPOJO)

There is no actual record of Mary’s date of birth in Jerusalem, but Catholic tradition marks the event as a liturgical feast on September 8 or nine months after the solemnity of her Immaculate Conception celebrated on December 8. All masses today will be in her honor.

In Cebu, thousands of devotees like Del Rosario troop to the shrine in Simala.

Abelio Mangila, prior superior of the Marian Monks of Eucharistic Adoration (MMEA) — the founder and caretakers of Our Lady of Lindogon Shrine — said that the devotion to the Blessed Virgin Mary in Simala started sometime in 1997.

Mangila, who chose the religious name Frater Martin Mary, said he and other monks were victims of the 1991 Mount Pinatubo eruption in Pampanga.
As missionaries of that place, they were the last to evacuate as they had to be sure that all others were on safe grounds, he said.

According to Frater Martin, the image was given to them by a woman who came running towards the chapel, looking for a priest or whoever was in charge, at the height of the lahar destruction.

“And there came a woman carrying the image of the Blessed Virgin Mother,” he said of the woman who introduced herself as Terry Brooks.

He said Terry told him, “Frater Martin, I have to give to you this image of Mama Mary because I believe this image is safe inside the church.”

None of the monks recognized the woman whom they later tried to search in every village in Pampanga. But no one seemed to know anyone named Terry Brooks, he said.

The monk described her as Filipina.

“That was the first time I saw her, and maybe the last time. I didn’t see something mysterious,” he said.

With permission of then Cebu Archbishop Ricardo Cardinal Vidal in 1996, the monks moved to Cebu with the image of the Blessed Mother.

Devotion began about a year later when a five-year-old boy was healed of dengue after he was brought to the monk’s little chapel atop the mountains where the image was installed.

“He was a victim of a dengue epidemic. Dinala siya ng kanyang parents kay Mama Mary (His parents brought him to Mama Mary),” he said of Jollibee Sejuela who now serves as an altar boy in Simala.

Since then, a lot of others experienced healing with proofs displayed at the shrine’s museum, said Frater Martin.

Frater Martin hesitates to call the incidents a “miracle” but a “holy intercession.”

“Let’s not use that term. When it comes to the church, we cannot easily declare a miracle because that needs examination for authenticity,” he said in Cebuano.

Cebu Auxiliary Bishop Emeritus Antonio Rañola is reportedly collecting records of the supposed miracles for the Vatican to determine if these were “heavenly intercession.” 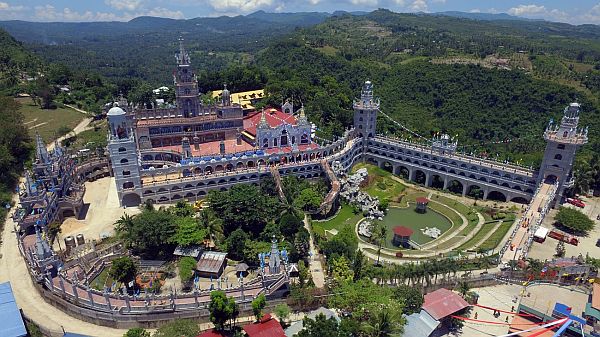 “We will sing her a mañanita song, and serenade her in our harana,” said Frater Martin of Mary’s birthday, a grand feast.

A pontifical Mass at 11 a.m. will be presided by Bishop Oscar Jaime Florencio, followed by a Marian procession in the afternoon. Bishop Emilio Bataclan will celebrate the evening Mass.

“This year, we ask for peace and prosperity of the Filipino people,” Frater Martin said.

For Cebu Archbishop Jose Palma, the number of activities to honor the Blessed Mother is evidence that the Philippines is “Pueblo Amante de Maria (A People in Love with Mary).”

Palma encouraged the faithful to deepen their love for Mary by understanding her role in the salvation of mankind.

Msgr. Joseph Tan, media liaison officer of the Archdiocese of Cebu, explains why the birthday of the Blessed Virgin Mary has become a popular devotion in the Philippines.

“The event resonates the culture wherein we celebrate birthdays of our loved ones. For us, this celebration inspires hope. Mary is the new Eve,” Tan said.

“She is the mother of Jesus, and the fulfillment of salvation. Her birthday is a celebration of our aspirations of a better future, putting our full trust and confidence in God’s promises,” he said in an interview.

Tan said Mary’s birthday is often celebrated by attending masses, praying the rosary and offering flowers and candles to the Blessed Mother.
“But the best present we can give to Mary is to follow her virtues and characters,” Tan said.

Mary was holy and free from sin. She was also compassionate and sensitive to the needs of others.

“She showed her being merciful when a newlywed couple ran out of wine in a wedding banquet in Cana. She, indeed, is the mother of mercy,” the monsignor added.

Tan encouraged Filipinos to seek Mary’s intercession for the good of the country and its people.

Jenny Stoner, a devotee, prayed for love in the family to the Blessed Mother.

“Love kay bisan pa unsa ka dako sa imong problema, kon naa lang ang love sa imong pamilya makaya ra ang tanan (I pray for love because no matter how big your problems are, if there is love in the family, you can handle everything),” she said.

TAGS: feast, for, her, love, Mary, NATIVITY, THE