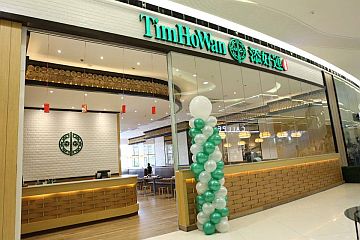 Cebu’s vibrant food and beverage sector has attracted internationally-recognized brands like TimHoWan restaurant to expand in Cebu, a food industry trend that has driven the retail space demand in Cebu.  CDN FILE PHOTO

The entry of internationally-recognized brands and the aggressive expansion of homegrown restaurant chains in Cebu are seen to continue driving the absorption of retail space demand in the country’s second largest urban hub.

This, coupled with the Filipinos’ love affair with dining, is poised to sustain the food and beverage (F&B) segment’s place in local real estate’s retail sector.

“We see foreign brands entering the Philippine market, a lot of which are specializing in a single product. There are also some local brands that are thriving and are competing well against their foreign counterparts,” Joey Bondoc, research manager at Colliers International Philippines, said in an interview with Cebu Daily News.

The property management and research firm observed that the F&B segment accounts for 30 to 50 percent of the total retail space in the country.

He said that 70 percent of the country’s gross domestic product (GDP) is attributable to consumer spending, in which every household spends 40 percent of their income on F&B.

Remittances from overseas Filipino workers (OFW), which fuel household spending, also play a role in the growth of the retail sector in the country.

The Bangko Sentral ng Pilipinas projected a four-percent growth for OFW remittances this year, which is seen to increase the demand for F&B among households.

Consumer spending is broken down into health, food and beverage, and communication, among others.

Bondoc said that in the last seven years, the F&B segment has been growing by 5.5 percent annually while the national GDP has been expanding at a pace of 6 to 6.5 percent each year.

Restaurants and hotels, meanwhile, have been growing by 7.3 percent annually, which is even higher than the country’s own economy.

“That’s a good indicator of food and beverage spending here, which will fuel the demand for retail space take-up,” said Bondoc.

He also cited the mix of foreign and Filipino F&B concepts driving the demand for retail space take-up not just in Manila, but also in Cebu, Iloilo, Bacolod, and even areas outside these urban centers.

The company operates 200 stores under 12 restaurant brands in the country and is looking to introduce two more brands aside from the Michelin-starred dim sum restaurant in Cebu soon.

In an earlier interview, FooDee Global Concepts chief executive officer Rikki Dee said Cebuanos now dine outside more often, with people dining outside only four times a week in the past but has since increased in frequency to 10 times a week.

According to Dee, the Cebuano market has matured not only in population but also the economic DNA that attracts more investors like them to come here.

“We have done some studies not only here (Cebu City), but also in its neighboring cities, and we found out that the other cities are growing as well with a lot of developments unfolding. In terms of purchasing power, Cebuanos are now earning well to be able to afford dining out more often,” he said.

In July this year, the company behind Ding How Dimsum House also reintroduced the well-loved homegrown dim sum restaurant to the Cebuano public, banking on the growing food market in the metropolitan.

Steven Kokseng, marketing manager at Harbour City Dimsum House Co., Inc., earlier said they have seen the growth of the dining public over the past two years.

“In the last two years, we’ve noticed that the Cebuano dining public has become more sophisticated, more open to try out new things,” he said during a media launch for the restaurant at Robinsons Galleria Cebu.

As of end-2016, total commercial-retail spaces in Cebu were estimated at 1,080,000 sq.m. with the steady completion of the SM Seaside City Cebu at the South Road Properties, marking a phenomenal 98-percent growth from the estimated 545,000 sq.m. of retail spaces in 2013.

Because of the rapid growth in retail spaces, vacancy increased in the last four years, Pinnacle said.

The estimated vacancy rate of commercial retail spaces started at a low 2.55 percent in 2013 and dipped to just 2 percent in 2014.

Due to the increasing retail stock, estimated vacancy increased to 12 percent in 2015 when more than 200,000 sq.m. of retail spaces were offered to the market. Vacancy dipped again to nine percent at presence, since the market is steadily absorbing vacant retail spaces.

Food as driver of growth

F&B, which is considered a sub-sector under Fast-Moving Consumer Goods (FMCG), is seen to drive the country’s retail sector.

“In the Philippines, since we are still developing and many in the society are still “hand to mouth,” food will always be a driver of growth,” said Go.

Go also noted that the most successful commercial-retail establishments, whether malls or smaller arcades, are those with supermarkets as anchor stores.

Without these supermarkets, he said, there is no come-on for customers.

“Other categories will survive only as long as there are supermarkets. It is the main driver of the mall or arcade. Few will flourish without these anchors,” said Go.