Tomas, in the eyes of Miguel 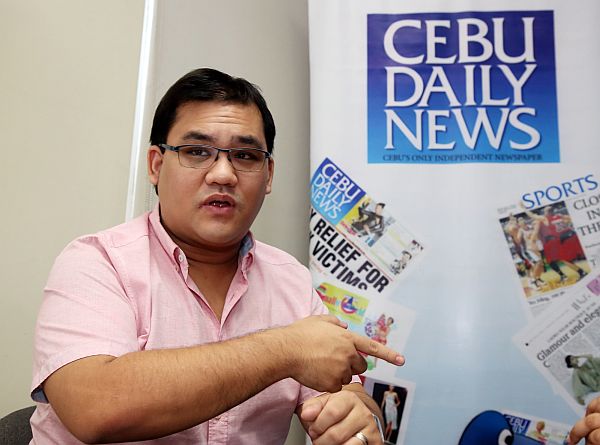 These were the adjectives that tumbled out of the lips of Miguel Osmeña when he was asked to describe his father Cebu City Mayor Tomas Osmeña.

Miguel, 32, is the only child of the mayor and his wife, Cebu City Councilor Margarita “Margot” Osmeña.

Miguel is one of the 10 great-grandsons of former president Don Sergio Osmeña Sr., whose 139th birth anniversary on Saturday, September 9, was celebrated not just by the Osmeña clan but also as an official holiday in Cebu.

Even if politics is in the family’s DNA, Miguel decided to go into the private sector as an investor.

According to Miguel, he never considered following in the footsteps of three generations of Osmeñas who descended from Don Sergio: Sergio Jr. or Serging, the son of Don Sergio and the father of Tomas; uncle Sergio III or Serge, a former senator and brother of Tomas; and his father’s cousins, brothers John Henry or Sonny, a former senator and now mayor of Toledo City in southern Cebu, and Emilio or Lito, a former governor of Cebu.

Among the fourth-generation Osmeñas, Miguel is now the only one left in the political limelight in Cebu, owing much to his being a constant companion of his father.

In an interview with Cebu Daily News, Miguel reveals he knew that at a certain point in his life, he might consider following in the footsteps of his parents and relatives. But now is not yet the right time to think about it, he says.

“I would lie to you and tell, ‘No, being a politician never crossed my mind.’ Of course, it did, but I just have no direct plans yet. I am open to any possibilities though,” he stated.

It is not surprising that Miguel will choose the entrepreneurial path since history books will show that the first known Osmeña in Cebu was a businessman.

The Osmeña lineage is traced to a certain Chinese-mestizo (Mestizo de Sangley in Spanish, which means of mixed Chinese and Filipino ancestry) who went by the name of Severino Osmeña, according to “The Life in Old Parian,” a book penned by Concepcion Briones.

In the early 1800s, Severino married twice, first to Vicente Rita, with whom he had eight children; and Paula Suico, with whom he had two children, Lazaro and Juana, the latter being the mother of Don Sergio Sr., who eventually became the third president of the Philippines and dubbed as the Grand Old Man of Cebu.

As a direct descendant of Don Sergio, Miguel has learned even from an early age that politics and engaging in public service is part of being an Osmeña.

Miguel, who literally grew up in City Hall — Tomas was Cebu City mayor from 1987–1995 and from 2001–2010, and now serving his three-year term that will end in June 2019 — describes his father as “someone who strongly believes in the right reason for the better of everyone.”

“He does not care about your age as long as he sees you qualified for the job. And I think this is one trait he got from the Grand Old Man. Our great-grandfather, at the age of 27, was the youngest Filipino at that time elected as the first Speaker of the House of Representatives. Because he was qualified,” he adds.

Now that he has a family of his own, Miguel lives separately but not too far, as his house is just across his parents’ home in Guadalajara, Barangay Guadalupe, Cebu City.

Miguel is married to former actress and now-businesswoman Bea Villegas. They have a daughter, three-year old Anna Margarita Victoria or “Anita.”
Living in such proximity, it is no wonder that Miguel gets a ringside view of his father’s working habits, which at times he finds amusing but at the same time leaves him in awe of his father’s dedication to public service.

One late evening, Miguel recalls seeing the living room light of his parents’ house still turned on. Curious, he entered their residence to find his father bent on texting as the clock just struck midnight.

“My father is the only person I know crazy enough to post his phone number publicly,” he says.

The mayor has been sleeping late just so he can respond to complaints, information and messages sent to him through text, the son notes.
That is dedication to public service, adds the son, who jokingly describes his father as the “barangay captain of Cebu City.”

“Even the smallest complaint, he has to tend to it. Because like I told him: Dad, you’re the barangay captain of Cebu City. Even the smallest problem, it’s his responsibility,” Miguel says.

In between laughs, he reveals to CDN that no complaint is too small for his father to act on.

One time, he says, Tomas threatened to cancel the business permit of a cell phone repair shop after a grade 10 student sent him a text complaining that her cellular phone she sent for repair to the shop had apparently been replaced with a fake one.

After the mayor acted on her complaint, Migue says, “The girl texted my dad and said, ‘Salamat kaayu, mayor. Naa nakoy bag-ong cellphone. Hehe (Thank you so much, mayor. I now have a brand new cell phone).”

No sense of entitlement

Growing up, Miguel’s bond with his father was formed in between play times, talks about planes, cars, ships, hunting and cooking.

He was only nine years old when his father first became mayor, and Miguel recalls they never spoke about politics even as he was there with him a number of times in City Hall.

During his childhood, electronic gadgets were not invented yet. Miguel says he first witnessed his father talking about something passionately when they were discussing airplanes.

“He loves airplanes, and loves to fly. It was my dad who taught me the structure of an airplane, and how it will be flown into the sky,” he explains.
Tomas, on his Facebook page, occasionally posts photos of him cooking, which Miguel reveals is one of his father’s hobbies that allows him to de-stress.

“I love that he cooks. I’m very lazy and my mother doesn’t really know how to cook. But my father cooks out of passion. He loves cooking, especially humba, and it’s something that bonds our family together,” he beams.

Moreover, Miguel thinks his father’s passion for cooking was also a means to ensure that he, the son, could lead a normal life as a kid.

There were more happy times, he recalls, but none that allowed him to think that being an Osmeña or being the son of a mayor entitles him to anything.

“You’d expect we recreated this popular conversation between Mufasa and Simba in the Disney film, Lion King, where they both stand on a cliff. And Mufasa tells his son, Simba, that ‘everything the light touches’ will be his. My dad and I never had that kind of conversation. He did not take me to Tops (in Barangay Busay) and say, ‘Unya imoha na ni tanan ha?’ (Later on, everything here will be yours),” says Miguel.

TAGS: eyes, in, of Miguel, THE, Tomas