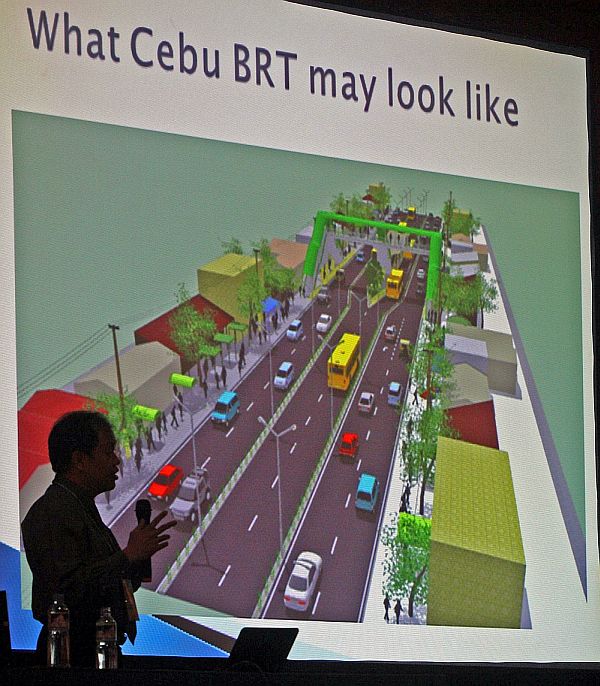 BRT BRIEFING in 2010. In this photo taken on Nov. 26, 2010, Cresencio Montalbo Jr., an associate professor of the University of the Philippines Diliman, presented the feasibility study for a Bus Rapid Transit (BRT) system for Cebu City during the 36th National Convention of Philippine Institute of Civil Engineers at the now-defunct Cebu International Convention Center (CICC) in Mandaue City. (CDN FILE PHOTO)

Now it can be said. The implementation of the Cebu Bus Rapid Transit (BRT) project is moving full steam ahead.

The National Economic and Development Authority (Neda) Board, which is chaired by President Rodrigo Duterte, has finally approved the additional P5.69-billion budget requested by proponents of the BRT project in its meeting at Malacañang yesterday afternoon.

The development was announced by BRT Project Implementation Unit (PIU) head Rafael Yap, who said he was informed by Department of Transportation (DOTr) Assistant Secretary Arnold Fabillar about the approval.

“The Board’s approval signifies a confirmation of BRT’s viability for Cebu City despite recent criticisms leveled against its implementation. It also signifies the commitment to the Duterte administration’s Build, Build, Build program of infrastructure development, (to) which the Cebu BRT project is a part,” Yap said.

Yap said he was informed that the President was not in the Neda Board meeting, but he was represented by Finance Secretary Carlos Garcia Dominguez III.

He added that the Neda Board meeting in Malacañang started at around 4 p.m. yesterday, and he received the text message from Fabillar at 5:25 p.m.
“This is the final approval, so, BRT Project is really a ‘GO’ project,” read a portion of the text message of Fabillar to Yap.

The Neda Board approval came hours after the Cebu City Council passed a resolution asking the BRT-PIU to give the city councilors a copy of the feasibility study of the BRT project for their perusal.

Back then, the Neda ICC–CabCom found the project still “very much economically viable” despite the increase in cost, which is mainly for the road right-of-way (RROW) acquisition for the project.

From the earlier approved budget of P10.6 billion, the BRT project would now cost P16.3 billion.

Yap explained that the increase in cost was due to the passage of Republic Act 10752 or the Right of Way Act which requires government implementing agencies to offer the market value of properties to be acquired for government infrastructure projects.

The new law was intended to facilitate land acquisition proceedings, which is the main reason for delays in government infrastructure projects.

The Neda Board is also composed of secretaries from different departments including the Department of Budget and Management, Department of Finance, Department of Public Works and Highways, and DOTr, among others.

He said several notices were already sent by the Land Acquisition Committee, which is composed of officials from both the BRT-PIU and the Cebu City government, to owners of properties that will be affected by the project.

The road widening is needed in the portions of the BRT route that will have bus stations and terminals.

The 21.5-kilometer BRT route will start at N. Bacalso Avenue and will traverse through Osmeña Boulevard, Escario Street and the Banilad-Talamban (Ban-Tal) Road.

When asked if the Neda Board’s approval meant that the project won’t be stopped anymore, Cebu City Administrator Nigel Paul Villarete said he hoped so.

“I sincerely hope so. There will always be people who don’t want Cebu to have this kind of mass transport system. We just keep on hoping that our leaders will be properly guided as we move on,” Villarete said in a Facebook comment.

The Cebu BRT project has been the center of the controversy last month after calls for the suspension of its implementation surfaced.

Presidential Assistant for the Visayas Michael Dino has been opposing the project, saying it will not work in Cebu City where roads are narrow, as was also recommended by transportation engineer Rene Santiago in an earlier forum.

It even came to a point wherein the DOTr issued a press release saying that the BRT project has been placed on hold.

But since last month until yesterday, Yap clarified they never received any formal memorandum from the DOTr to this effect.

Cebu Daily News tried to get Dino’s comment on the Neda Board’s approval, but text messages sent to him were not answered.

Sought for comment, Cebu City Councilor Joel Garganera, who used to head the Cebu City Council’s committee on transportation, said they will continue their calls for a thorough review of the project.

He said there are still valid concerns regarding the project, including the lack of dedicated lanes in portions of the BRT corridor specifically along the Ban-Tal Road where the streets are narrow.

“Whether the additional budget is approved or what, the thing is, will it benefit us? Until such time that issues will be addressed like that of the dedicated lanes and the underpass along N. Bacalso Ave., we can’t just approve of the project. How can you be rapid if you share the lane with other vehicles? It defeats the purpose of the BRT,” he said.

Garganera added that they will continue to ask the BRT-PIU for a copy the BRT’s feasibility study for their guidance.

During the City Council’s session yesterday afternoon, the councilors passed nine different resolutions proposed by Councilor James Anthony Cuenco regarding the BRT and other traffic-related concerns following a privilege speech he delivered.

The first was to ask for a copy of the feasibility study, which, Cuenco said, has been marked as “confidential” when it is supposed to be a public document.

He said that since the project has been approved by a national government agency, the information from the study should be accessible to the public for scrutiny.

“And we, as policymakers, should have access to this so we can examine it closely, and perhaps, if needed, create legislation to allow for a better implementation of this proposed project,” he said in his privilege speech.

Aside from the BRT project, Cuenco proposed other short-term and cheaper projects that can be done by the city to address its traffic problems.
The City Council also passed Cuenco’s resolution asking the Land Transportation Office (LTO) and the Cebu City Transportation Office (CCTO) to properly train all traffic enforcers and barangay tanods on traffic management, and another requesting the Police Regional Office (PRO) 7 to augment the traffic police force in the city.

The other Cuenco-authored resolutions approved by the council asked the executive department to purchase 60 to 80 motorcycle units complete with head-worn microphones built into the helmets and attached to radios for traffic policing; sought the purchase of two tow trucks for CCTO to remove non-moving vehicles obstructing roadsides; a request to the Land Transportation Franchising and Regulatory Board (LTFRB) to assist bus operators to operate within existing jeepney routes and to replace “non roadworthy jeepneys”; and for the LTO to employ more stringent measures for repeat offenders and to have them retake their driving exams, among others.