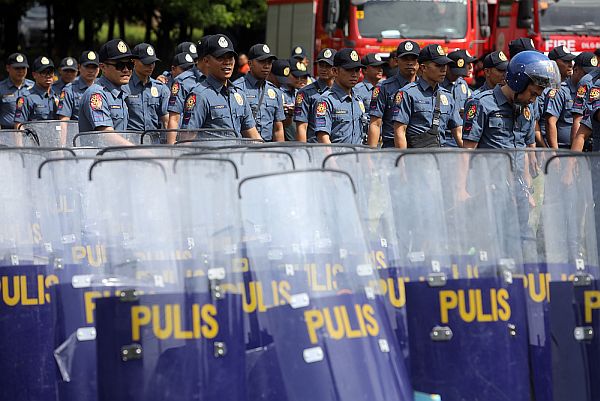 OVERTIME WEEK. Cebu City police are headed for double duty this weekend in securing the city during Sept. 21 rallies and the Asean ministerial meeting in Bohol.

It will be a busy week ahead for the Cebu City police as they secure both the city for the Sept. 21 rallies and Bohol province for the Association of Southeast Asian Nations (Asean) minister meetings from Sept. 19 to 21.

Senior Supt. Joel Doria, Cebu City police chief, said they will practice maximum tolerance similar to police units in Manila and other parts of the country.

He said they can request augmentation from the Police Regional Office (PRO-7).

“We are just avoiding infiltration (of communist rebels) since it will create chaos. So far the rallies had been peaceful,” Doria said.

Cebu-based militant groups earlier promised that they will police their ranks to avoid public disturbance.

President Rodrigo Duterte declared Sept. 21, which falls on Thursday this week, as a national day of protest.

He also ordered the suspension of classes and government work on that day.

But before dealing with protestors, the Cebu City police deployed 130 of its police officers, including SWAT teams, to augment security during the Asean ministerial meetings in Bohol province.

Bohol is hosting for the third time the inter-nation dialogue of finance ministers of Asean member nations.

“The point of entry is already identified. That is also guarded,” Doria said.