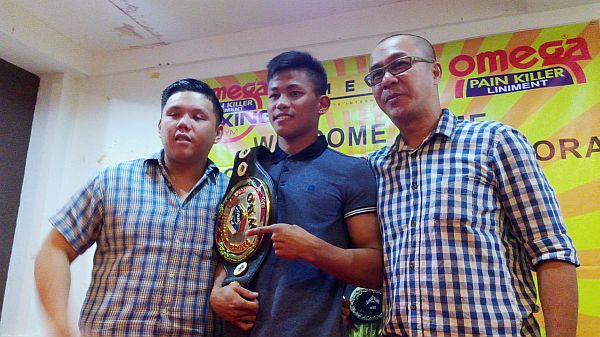 This after the Omega Pro Sports International (OPSI), the promoter of the newly crowned WBO intercontinental featherweight champion, said that an American and South African promoter are interested in promoting a world title showdown between Tepora and WBO world featherweight king Oscar Valdez.

Tepora humiliated Komanisi in front of his countrymen at the Orient Theatre in East London, South Africa.

In a press conference yesterday, OPSI vice president Jerome Calatrava revealed that no less than the famed match maker Sean Gibbons of the United States offered them a shot at Valdez’s world title.

“We received offers from a promoter in South Africa and Sean Gibbons and they are both proposing a world title fight between Jhack and Oscar Valdez but everything’s under review. This is a teamwork so we included Jhack in our plans and personally asked him about the offer and he said that he is very ready to fight for a world title. If the offer is on the table then we will grab it,” said Calatrava.

The 24-year old Cebuano prospect is expected to break into the top 10 of the WBO featherweight rankings after his victory last Saturday.
Calatrava did not name the South African promoter.

Tepora meanwhile, said that he is very willing to fight Valdez if given the chance.

“Valdez got power but I am wiser than him. His fight against Servania exposed him,” said Tepora who remains unbeaten in 21 fights with 16 knockouts.

His trainer, Jinggoy Jungco is also confident that his prized ward can win against the unbeaten Valdez (23-0-0,19KOs) who defended his title against ex-ALA Boxing gym stalwart Genesis Servania in a 12-round digfight in Tucson, Arizona over the weekend.

“In our fight with Lomanisi, we thought he moves a lot that’s why we opted to train in Baguio City to spar with national team members but we were wrong. Lomanisi only stayed in front of Jhack and that kind of opponent is his favorite prey because they are easy targets. I think Valdez is a one dimensional boxer so Jhack has a big chance of winning if they fight,” said Jungco.

Tepora also revealed his plan of staying in the featherweight division where he believes he is more dangerous and powerful compared to the time when he was still in the bantamweight class.

“I am stronger and more powerful in the featherweight division, I don’t have any difficulties getting the weight, in fact I was under the weight limit when I fought Lomanisi,” added Tepora.

Aside from Valdez, Tepora is also willing to face the top boxers in the other boxing governing bodies like the WBC, WBA and IBF.

Calatrava is also planning to have Tepora defend his title in the main event of Who’s Next 6? before the year ends.