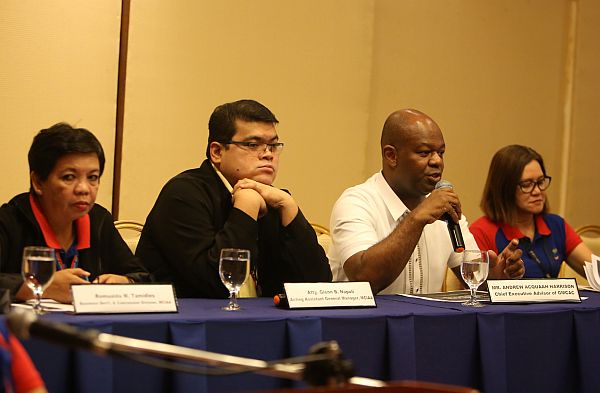 Andrew Acquaah Harrison, chief executive advisor of GMR-Megawide Cebu Airport Corp. (3rd from left), explains the reason for the request for an increase of some airport fees during a public hearing at the Mactan airport. Lawyer Glenn Napuli, acting assistant general manager of the Mactan-Cebu International Airport (2nd from left), was also present at the hearing.
CDN PHOTO/LITO TECSONCDN PHOTO/LITO TECSON

AIRCRAFT parking and tacking fees will be increased starting Nov. 1, 2017.

This developed after the Mactan-Cebu International Airport Authority (MCIAA) issued an administrative order to increase airport fees and charges.

Glenn Napuli, acting assistant general manager of MCIAA, said the order is part of the Concession Agreement (CA) between the GMR Megawide Cebu Airport Corporation and the Department of Transportation (DOTr) signed on April 22, 2014.

“It is the responsibility for MCIAA to raise charges and fees,” he said.

CA Section 24 says that “with respect to Aircraft Parking Fees and Tacking Fees, the Concessionaire shall be authorized to charge on O&M Start Date the rates for such fees as are currently provided under Administrative Order No. 2, series of 2011, issued by MCIAA.”

Andrew Acquaah Harrison, chief executive advisor of GMR-Megawide Cebu Airport Corp. (GMCAC), said they requested for an increase of fees which was based on the contract provided.

“The increase is very nominal. It is provided by the contract we must also follow it,” he said.

The proposed domestic operations parking fees for aircraft weighing not more than 50,000 kilograms includes P25.66 from the existing P25.54 for the first half hour, and P20.53 for additional half hour from P20.43.

Also, aircraft weighing 100,001 kilograms and above has to pay the same parking fee of P212.00 but an additional of P56.45 for another thirty minutes.

The first two hours of aircraft parking is for free. Fees are computed based on the maximum take-off in Aircraft’s Certification and the number of hours parked after. There was also a proposed hike of tacking fee, a loading bridge with single tube.

“There is no charge for you (aircraft) to turn around. These charges only occur when you have longer ground time,” Harrison said.

He also said airlines with longer ground time deprived other aircrafts to utilize the parking base.

Napuli said the increase of the fees would be based on the Consumer Price Index (CSI) that will be given by the Philippine Statistics Office.

“It is based on the inflation factor which is sent every year by Neda and then by Philippine Statistics office that is used as bases for the computation,” he said.

“If the CPI doesn’t increase then it implies there is no rate increase. However, GMCAC as the operator could request to MCIA for an increase,” Harrison said.