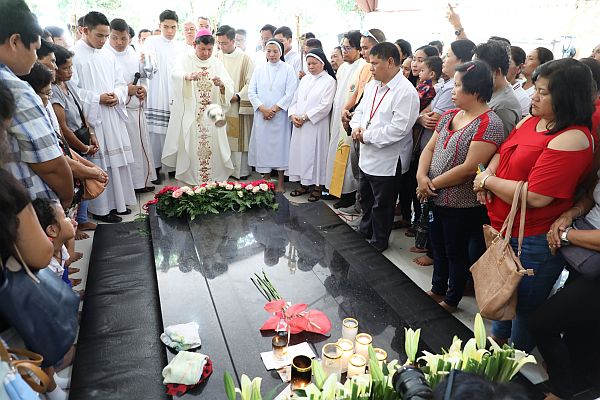 ON HIS 29TH DEATH ANNIVERSARY

THINK of what you can offer instead of what you can get in return, said Cebu Auxiliary Bishop Dennis Villarojo as he remembered the life of Archbishop Teofilo Camomot in a Mass commemorating the priest’s 29th death anniversary at the St. Therese Chapel in Barangay Valladolid, Carcar City, Wednesday.

(That is the life lived by Archbishop Camomot. He did not mind even if his clothes were tattered because his happiness lay in what he could give rather than what he could get.)

Archbishop Camomot, who spent his life in constant prayer and true acts of charity, is widely revered as a holy man whose cause for beatification and canonization has been underway since October 2010.

In his hometown, Carcar, many people attest to the lives he touched.

Estelita Canos, 66, reminisced how the bishop warmly treated his parishioners who were instantly drawn to him.

“Mahangopon gyud na siya sa buhi pa (He was very approachable and welcoming when he was still alive),” said Canos.

Canos said that she once brought to Camomot her then seven-year-old daughter who was believed to be possessed by evil spirits.

After the Mass, devotees proceeded to Camomot’s tomb just behind the chapel where Villarojo and other priests offered a prayer.

Some devotees lay on top of his tomb, wiped it with their handkerchiefs, and prayed for intercession, while others simply knelt down to pray.

Sister Ma. Emper Rabasano, a nun under the Daughters of St. Therese congregation, says that through Camomot’s intercession, she was healed of her illness.

“I was bleeding for four months, then I was diagnosed with myoma around November 2015. When I underwent another ultrasound in 2016, the doctors couldn’t find any tumor,” said Rabasano, who did not take any medication for myoma.

According to Rabasano, she lay on top of Camomot’s tomb the night before she underwent her ultrasound and asked for the late archbishop’s help.

“It was my birth-month in June, and I asked him to help me in bringing my prayers to God as a birthday gift,” said Rabasano.

Rabasano’s medical records and testimonies were among the documents submitted by the Archdiocese of Cebu to the Vatican for review and assessment as part of the process for Camomot’s beatification and canonization.

Fr. Mhar Balili, the postulator of the archdiocese, said that they have already submitted all the documents to Rome.

“We’re only waiting for the feedback from Vatican, but I believe we have gathered enough testimonies and we have done our best,” said Balili.

Balili said that they are hoping for more miracles to happen though the intercession of Archbishop Camomot to add more evidence in support of the cause.

Read Next
DFA-Cebu to open more slots for passport applicants