Five Kaohsiung buses to be donated to Cebu City 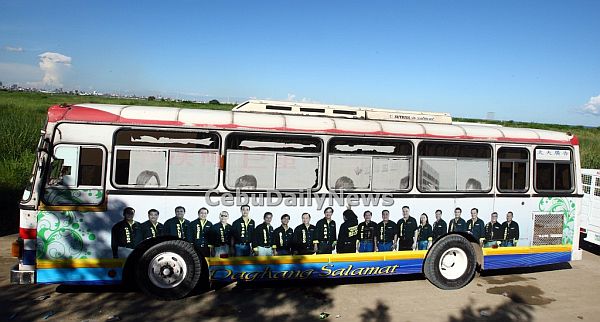 A 2010 file photo of a Kaohsiung bus bearing the lineup of BO-PK aligned Cebu City officials plying the city streets.

“(The trucks are) second hand but in very good condition. The buses can help make traveling easier for our constituents especially the elderly and students,” said Alvin Dizon, the mayor’s consultant and Sister Cities Commission chief.

These buses will be used to fetch stranded commuters and those attending funeral rites, Dizon said.

The buses were given to the city in a symbolic turnover ceremony last Tuesday that was attended by Mayor Chu Chen together with other city officials of Kaohsiung.

Dizon said Mayor Chen, also requested the presence of Cebu City Mayor Tomas Osmeña at the 2018 Global Harbor Cities Forum to be held in Kaohsiung on Sept 25-27 next year.

He said representatives of 50 harbor cities from 25 countries will take part in the global conference.

Dizon said the buses will ply the city streets within this year.

He said the city government is still working on the shipment arrangement.

Since then, the Taiwanese city donated more than 100 buses and cars to Cebu City.

Dizon, Garcia and Yap were among the 800 delegates from around the world who took part in the activity.

“It also gives residents the chance to experience how traveling through integrated, socially inclusive and healthy transport options can improve their quality of life,” he said.

TAGS: ‘BEST GIFT TO THE CITY’, Be, buses, city, donated, five, kaoshiong, to, to cebu