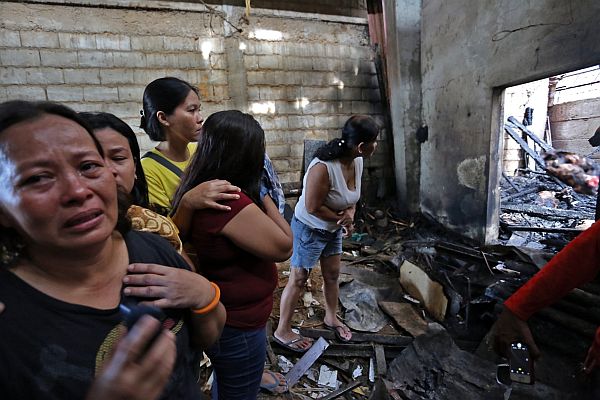 Friends and coworkers of Antonio and Maricel Paz shed tears as they look at the charred remains of the couple and their 10-year-old son. The family was trapped inside their two-storey bunkhouse inside the compound of the Melgo General Sales Inc. lumber yard when it was razed by fire.
CDN PHOTO/JUNJIE MENDOZA

A family was burned to death when fire razed their two-storey bunkhouse inside a lumber factory on Hernan Cortes St., Barangay Tipolo, Mandaue City, Thursday dawn.

The charred remains of Antonio Paz, 34; his wife Maricel Paz, 32; and their only child Ancel Jay Paz, 10, were found at the ground floor of what was left of their house, inside the Melgo lumber yard. Maricel and her son were in an embrace.

SFO1 John Herediano, fire investigator of Mandaue City Fire Station, said they were still investigating the cause of the fire but that it was most likely because of electrical misuse.

He said a neighbor, Romeo Andales, 57, said that he heard a small explosion followed by a power outage and a few minutes later, the victims’ house was already engulfed by the fire.

Andales and other workers who also live inside the compound of the lumber yard tried to rescue the victims but could no longer go inside the burning house.

His daughter, Jonnah, 18, said she woke up at around 4 a.m. because of the explosions and the smell of smoke.

(I first heard small explosions. When I went out of our house the fire had spread.)

Romeo, who works as a boiler-tender, told CDN that Antonio was a good man and worked as a truck driver of the company for about 13 years already. His wife works at the Pacific Mall in Mandaue City.

He said that near the victims’ house was the lumber’s old boiler which was currently dismantled using acetylene for cutting, but work stopped at 5:00 p.m.

SFO1 Herediano said they received the alarm at 4:10 a.m. and were able to control the fire within two minutes. The fire was finally put out at 4:30 a.m. The damage was pegged at P20,000.

Angelo Paz, younger brother of Antonio, who also works at a lumber yard in Maguikay, Mandaue City, rushed to the area but broke down after seeing the charred bodies of the family.

Maricel’s brother, Joel Libre, also rushed to the fire scene after receiving a text message about what happened to his sister and her family.
Angelo Paz said they would most likely bring the family’s remains to their hometown in Negros.

The owner of the MELGO General Services Inc., who refused to be named, said they will shoulder the burial expenses and give financial assistance to the relatives of the family.

Mayor Luigi Quisumbing in an interview with reporters expressed sympathy for the bereaved relatives and said the city’s Social Welfare and Services (CSWS) will provide for the transportation expenses to bring the family’s remains to their hometown in Negros Oriental.

Mandaue City Fire Marshall Josephus Alburo said the house was not really an ideal dwelling because it lacked fire exits and was made of light materials. It also did not have proper electrical wiring.

The lumber area however, was not affected by the fire due to the firewall that separated the victims’ house and the pile of lumber.

Read Next
Cuenco to question Ombud decision in CA