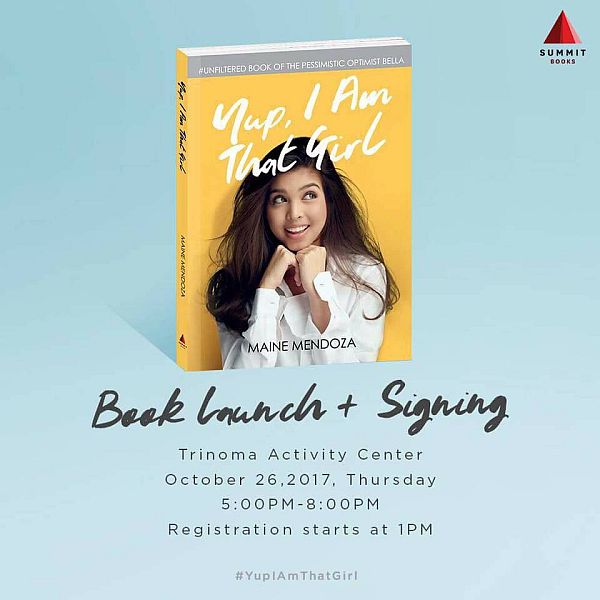 PHENOMENAL star Maine Mendoza revealed a special surprise for her fans — she will soon release her first book. On her official Facebook page, Mendoza announced Tuesday night the release date as well as signing event for her book titled “Yup, I Am That Girl.”

“I’m so happy to announce that I’ll be launching my book #YupIAmThatGirl from @summitbooks, on Oct. 26, 5-8 p.m. at Trinoma Activity Center! Registration strictly starts at 1 p.m. See you there!” Mendoza posted.

On Monday night, she first confirmed the launch of the book also on her Facebook page.

“I’m about to release my FIRST EVER BOOK c/o @Summit.books! #YupIamthatgirl is coming soon to bookstores and news stands! Stay tuned for book launched details!” Mendoza captioned the video she posted.

“Hello @langleave @MichaelFaudet please help us promote Maine’s book,” @sassymeng said.  The “Sad Girls” author then reposted the tweet and said, “Wow, I love the cover! Please save me a copy @nbsalert.” @nbsalert is the Twitter handle of National Book Store.

Faudet, for his part, quoted the post and replied with: “How exciting! I know Maine has such a passion for writing and it’s wonderful she is sharing her words with us.”

To recall, Leav wrote a poem for Mendoza and loveteam partner Alden Richards titled, “Stars in Love” which was included in her 2016 book “The Universe of Us.”

Aside from the book, fans of AlDub are looking forward to Eat Bulaga’s first ever tele-movie which is topbilled by Mendoza and Richards.

Titled “Love Is …,” it will be shown this Saturday, October 21. A drama and romance  film, ”Love Is …” is directed by Adolf Alix Jr. and also stars Shamaine and Nonie Buencamino, Rodjun Cruz, Dianne Medina, Marky Lopez, among others. (Mich  Padayhag)