Belano likes what he sees so far from his rookies 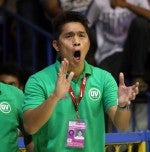 THE UNIVERSITY of the Visayas (UV) Green Lancers’ performance may be far from the top-notch form that made them champions in the Cebu Schools Athletic Foundation Inc. (Cesafi) last year but head coach Felix “Donbel” Belano is hinting of better things to come.
Playing with a rookie-laden roster, the Green Lancers finished in third place in the recently concluded 2014 Sinulog Cup, finishing the elimination round with just a win against two losses and defeating the University of San Carlos Warriors for the third place trophy.
In spite of the lackluster finish, Belano said that he is excited for the team as they prepare to defend their men’s division crown in the Cesafi this season. “I liked what I saw from the rookies in the tournament,” Belano said in reference to rookie stalwarts Josue Segumpan, Rey Suerte and new import Jean-marie Mpouma. “They defended, they hustled and they showed their willingness to learn.”
Though Mpouma did not post eye-popping numbers like his predecessor, the high-leaping Mike Nzuesseu, Belano said that his 6-foot-10 center has a lot of upside, which he hopes he will realize in the coming months.
“Mpouma did great. He was very coachable and he will become better,” Belano added.
UV still has a lot of veterans in its fold led by inside-out combo of John Abad and Wowie Escosio. And though some did not play in the tournament, Belano said that his old reliables are still on their roster but are recuperating from injuries. /Correspondent Jonas Panerio