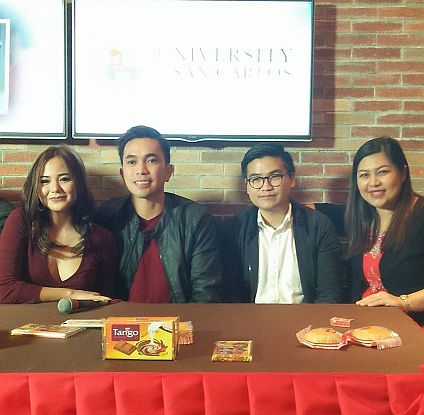 IS IT possible to plan your breakup with no drama?

Upcoming Bisaya romantic comedy film titled, “Magbuwag Ta Kay…” will tackle this premise in its story about sweethearts who plan their breakup before one of them leaves for Toronto, Canada.

Topbilled by internet sensation Rowell “Roy” Ucat, popularly known as Medyo Maldito, and ABS-CBN’s Star Power finalist Akiko Maria Solon, the film will have a premiere night on Nov. 30 at SM City Cinema and is set for a 2018 nationwide release.

Ucat was introduced to Solon early this year. When one of the producers of the film was searching for the female lead role, he recommended Solon.

Both stars revealed that their fans can expect a kissing scene in the movie.

It took them 24 takes to perfect the scene. Solon recalled that Ucat asked her if she would back out if she learns that they would have a kissing scene.

But the 23-year-old actress said she had no reason to back out because she considers it work and an opportunity to be chosen for the project.

After her “Star Power” stint, Solon became part of ABS-CBN teleseryes including “E-Boy,” “Pasion de Amor” and “Bridges of Love.”

Directed by Reuben Joseph Aquino and Janice Perez and written by Jude Gitamondoc and Therese Villarante, the movie is under Heritage Productions.

Its executive producers are Sunshine Lim and Charles Lim. It will be distributed by Viva Films.

Aside from the humor and love story, Sunshine said the film will also incorporate family values.

The scenes were shot entirely in Cebu, with locations in Lapu-Lapu City, barangay Busay in Cebu City, and the southern towns of Moalboal and Dumanjug.

“The film is a collaborative effort,” Sunshine Lim said during the presscon. She also said it is a dream come true for her to produce a Bisaya film that will send a message about family values, especially to the millennials.

As for the choice of lead actors, Sunshine said: “Wala mi nakita nga artists (to play the lead roles) other than Rowell Ucat and Akiko Solon.” Sunshine also thanked Viva Films for the opportunity after its decision to distribute the film nationwide with English subtitles.

Vicente Eduardo “Verb” del Rosario, Vice President for Operations of Viva South and grandson Viva founder Vic del Rosario, said that ever since he moved in Cebu, his goal has been to help create a more vibrant entertainment industry for Visayas and Mindanao.

“I noticed that iba ang culture dito, iba ang humor dito. Iba lahat. It’s different as opposed to what I have lived  for 24 years of my existence. We started with music. We created a Bisaya music. Eventually, we want to get into films,” Del Rosario said.