On the call for healing 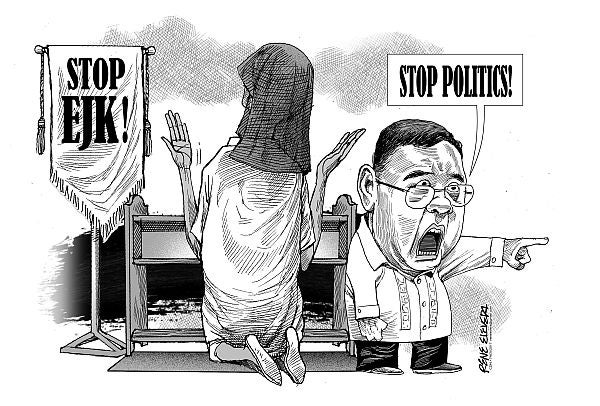 Good thing that the Palace didn’t take issue with the Catholic Church over its call to “heal the land” after it campaigned for an end to the extrajudicial killings in the country.

But if we are to listen to Presidential Spokesperson Harry Roque, the Duterte administration’s view of “true healing” consists of getting rid of the political dissension caused by the “Yellow army” and their critics.

“Accountability is essential to good governance. We are one in the true healing of this nation that has long been divided by politics. We must come together as one country and one people and help the government in building a nation free from drugs, criminality and corruption,” Roque said in a statement.

There is some point to this since, as a democracy, there will always be dissenting voices from a myriad number of sources, not least of whom will always come from the party that got beaten in the last elections.

How can there be unity if the perpetrators of the alleged extrajudicial killings aren’t arrested and prosecuted in a court of law? How can solidarity ensue when, aside from government failure to crack down and stop these killings, the Duterte administration’s attack dogs on social media continue to threaten and prosecute legitimate criticism and opposition to the drug killings?

But amid the harangues and putdowns, let’s stop and pause as we pay heed to the church’s appeal for a campaign against illegal drugs that is done right and within the ambit of the law.

We hope we can believe Roque when he said before assuming his post that President Duterte is waging his war against illegal drugs within the context and parameters of the law that he as a lawyer has sworn to uphold.

In initiating the healing, detained Sen. Leila de Lima was right to say that one must know one’s wounds in order to start the recovery process. And as far as she is concerned, it’s all about the extrajudicial killings and the prosecution of critics like her.

Going beyond politics, we still see an administration that’s more successful in raising the body count than ending the drug menace. In fighting fire with fire, President Duterte and his supporters hope the users and traffickers will be scared into submission and change their ways.

While peace and healing are sought for by all parties concerned, it won’t come overnight, and all of us realize that especially with an administration that’s dead set in its ways.

Only when another youth like Kian delos Santos is murdered or a foreign businessman is kidnapped and wrongfully accused then killed would this administration be forced to pay attention and recalibrate its policies.

TAGS: call, healing, on, THE