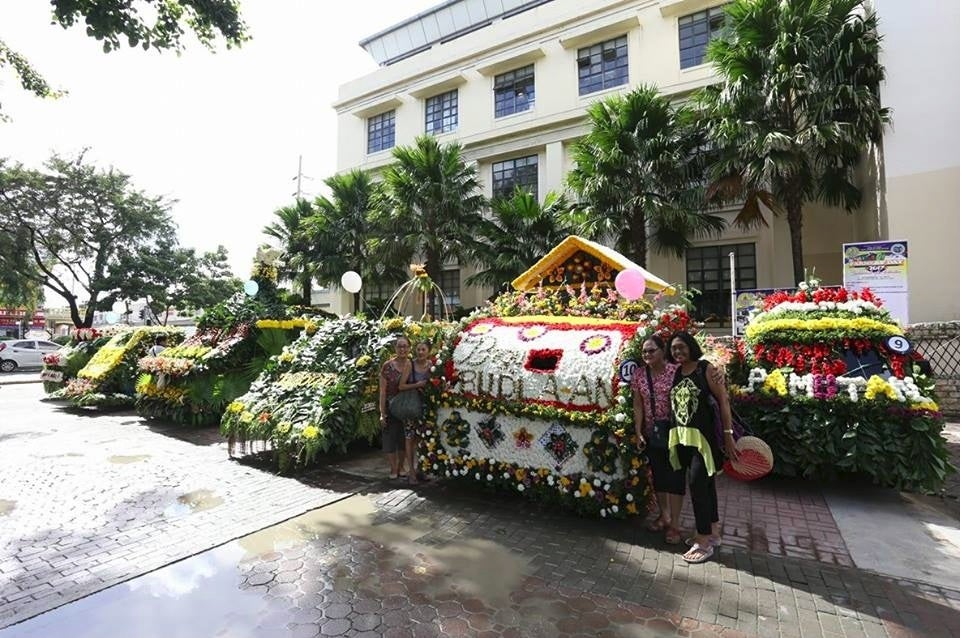 Floats of the different barangays park in front of Cebu City Hall, while farmers (below) display their farm products at the Plaza Sugbo to open the Farmers’ Day celebration.
cdn photo.

Over 10 barangays in Cebu City presented their floats made from their own products during the opening of the annual Farmers’ Day yesterday.

With the theme “Kausaban sa klima atong dawaton, sustinabling teknolohiya atong gamiton (We should accept climate change and use sustainable technology),” the event is now on its second year and organized by the city’s agriculture department with the objective of acknowledging the contributions of farmers to the agricultural industry in the city.

The float number 10 of Barangay Budlaan was considered as crowd-favorite. The float was decorated with various kinds of flowers produced by the barangay, such as anthurium, Malaysian mums, baby’s breath, among others. The float also had a small house in the middle decorated with different flowers.

Jenifar Coca from the Barangay Mayor’s Office of Budlaan shared that teamwork was their key in preparing for the event.

Coca said it took them a month to prepare not only for their booth but also for the float-making contest.

Coca said they were aiming to secure back-to-back titles in this year’s float-making competition, the result of which was still not available as of yesterday afternoon.

City Agriculturist Apple Tribunalo described the event as “a way to give tribute to the farmers for supporting the economy of the city.”

“This event is for Sugbuanons to showcase the resources that we have in the city and to give appreciation to our farmers,” she said. “Kung wala sila, wala tay makaon (Without them, we won’t have anything to eat),” she added.

Out of the 29 barangays, 15 joined the float-making contest during the opening of Farmers’ Day at 7 a.m. yesterday at the Fuente Osmeña Circle. It was followed by a parade from Fuente Osmeña to Plaza Sugbo, where the exhibition is taking place until Friday, November 10.

The farmers from the different barangays displayed their locally produced fruits, vegetables, herbs and plant ornaments in their respective booths.

“Proud mi sa among mga produkto (We are proud of our own produce),” said Teodora Secretaria, president of Maraag Sudlon II farmers.

Another participant, Halufa Farmers Association Chairman Sonny Cobrado, said he was grateful for the event as it gives the local farmers chance to showcase their livelihood and do business with the people in the city. Cobrado joined the farming industry at the age of 15. Now 40, Cobrado shared the challenges he faced during his career in farming.

“The problem we usually encounter is the changing of weather. Sometimes we experience typhoons and they result in premature growth of our crops,” Cobrado said in Cebuano.

In line with this year’s theme, Tribunalo introduced urban gardening to the city as a project for urban areas to be self-reliant.

The project was started by the city agriculture department in July 17, 2017. Ronilo Montejo, a city agriculturist, said the city government distributed fruits and vegetable seeds to the 32 urban barangays and taught them ways to plant the seeds and cultivate them.

Ten out of the 32 barangays participated in the booth display.

Montejo also said the project is like hitting two birds with one stone because it does not only help people create their own food but also reduce the garbage problem in urban barangays.

Tribulano, the head of the event, encourages the public to come and visit the fair at Plaza Sugbo and support the livelihood of local farmers. The event will formally close on November 10.