Yolanda survivors look back as they move on 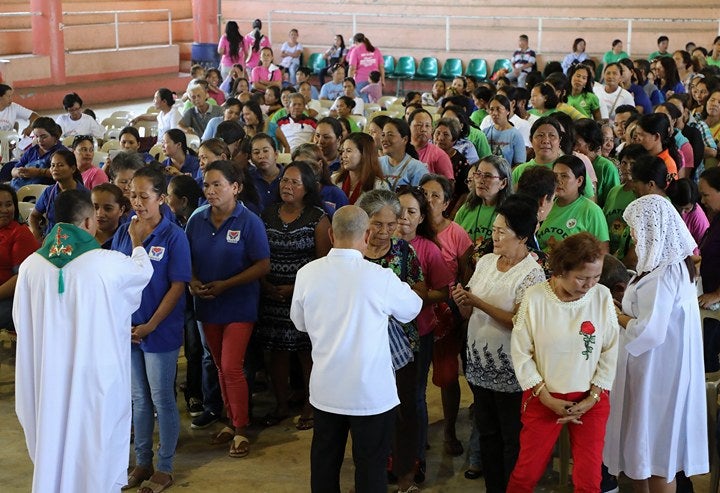 The municipality of Daanbantayan holds a Mass officiated by Fr. Rogen Leyson at the town’s center on Wednesday, November 8, 2017, to commemorate the 4th year anniversary of Super Typhoon Yolanda. Daanbantayan was one of the towns in northern Cebu hit hard by Yolanda as it lashed through central Philippines on November 8, 2013.
CDN PHOTO/TONEE DESPOJO

ONCE the construction of the comfort room in her new house is finished, Iluminada Aloba, 60, can say that a semblance of normalcy has finally returned to her life, and that of her 10 grandchildren living with her.

It was a long wait, four years to be exact, for Aloba to finally complete building her house — with the help of her children — since Super Typhoon Yolanda destroyed her house in Sitio Anunan, Barangay Poblacion of Daanbantayan town in northern Cebu.

But having a new house will not erase the lingering trauma, since her family is still anxious and scared every time it rains hard in their area coupled with strong gusts of wind.

When a video clip of a news coverage of Yolanda battering houses, trees and posts as it made its way through the northern towns of Cebu was showed yesterday during a ceremony to commemorate the 4th anniversary of the typhoon’s onslaught, Aloba wept.

Yolanda, packing winds of up to 315 kilometers per hour, made landfall in Tacloban City in Leyte on November 8, 2013, destroying everything on its path as it ran across Leyte and Samar islands and leaving over 6,000 people dead before it swept across other parts of Central Philippines — from northern Cebu all the way to Panay Island, rendering more destruction and deaths as it unleashed its fury.

Yesterday, around 200 victims of the super typhoon in Daanbantayan, one of the worst-hit towns in Cebu, attended the Yolanda anniversary event held at the town’s sports complex in Barangay Poblacion. The commemoration was organized by the local government of Daanbantayan, a first class municipality located 120 kilometers north of Cebu City.

Aloba was not the only one in tears as the video played, reminding them of how their properties were destroyed by the typhoon. But the event was also a reminder of how a strong community spirit helped them survive.

Aloba, a farmer, recalled that when Yolanda tore down her two-storey concrete house in Barangay Poblacion, she and her 10 grandchildren ran amid a heavy downpour, went against strong winds and dodged uprooted trees to find shelter in the sturdier house of her cousin in Barangay Bitoon.

Aloba’s testimony in front of the crowd yesterday seemed cathartic, as survivors thanked heaven for allowing them to survive.

“I was just so thankful that God gave us second chances because when Yolanda hit Daanbantayan, me and my 10 grandchildren were asking Him: is this the end of our time?” she said while trying to hold back another round of tears.

Fr. Rogen Leyson, assistant parish priest of the town’s Sta. Rosa of Lima parish church, reminded everyone to keep their faith strong as life rains down challenges on them.

“(Do you think) God must be somewhere else when Yolanda came? In the events surrounding our lives, God is always there. If He wasn’t there, we cannot receive all the blessings and positive things that came after Yolanda,” Leyson said in his homily during the Mass he delivered for the event.

He added: “Do not dwell on the lapses of the past because you can never move on. (Learn from them). We commemorate Yolanda not because we must remember its wrath but to remind us that our strength will withstand any challenges, big or small,” stated Leyson.

Daanbantayan Mayor Vicente Loot, who spearheaded the event, shared: “Yolanda was a nightmare. It’s something that we should not constantly recall. But it goes to show that even in worse times, it brings out the best out of everyone,” said Loot in his speech during the program.

“We saw people who have to sacrifice their own lives just to save others during the calamity, people who do not hesitate to help others,” he added.

The act of giving was not lost to Aloba who decided to give up her slot as a beneficiary of one of the more than 4,000 free housing units intended for victims like her in Daanbantayan.

Aloba said she does not need a donated house since her eight children, all of whom are working within Cebu City, provided her funds to build a new house on a piece of land they purchased in Barangay Bitoon.

“My children also have families of their own. We’re not wealthy at all. It’s just that, for me, other people needed the house more than I do,” she said.

Data from the Office of the Presidential Assistant for the Visayas (Opav) revealed that 22,423 houses are needed not only in Daanbantayan but also in other affected northern towns. But in Daanbantayan (population 84, 400), only 496 houses were completed while 190 are still under construction.

Loot assured that this time, there will be no delays made in finishing the construction of the houses.

“A total of 4,363 are intended for Daanbantayan alone. We have the largest share of free housing units among other towns in Cebu. This is why we submitted a complaint before the housing committee of the Senate (in 2016) why in the past years, there seemed to be no progress. Now, we’re glad the outcome of our complaint was fruitful,” Loot told reporters after the event.

At the Maya Park Homes, some of the 650 completed houses have been turned over to beneficiaries, he noted.

Fish vendor Lila, 47, and a neighbor of Aloba, said she did not mind the delays that she, her husband, and their five children had to endure before they were able to move into their own house at the GK Village in 2016.

“We did not mind them since we saw how our houses were being constructed. We understand that it’s not easy to distribute free housing units,” Lila said.

Read Next
Police, Sasing family insist Taytayan is the culprit

TAGS: back, move on, survivors, Yolanda