Experts: Landslides to continue, ground to stabilize in 4 months 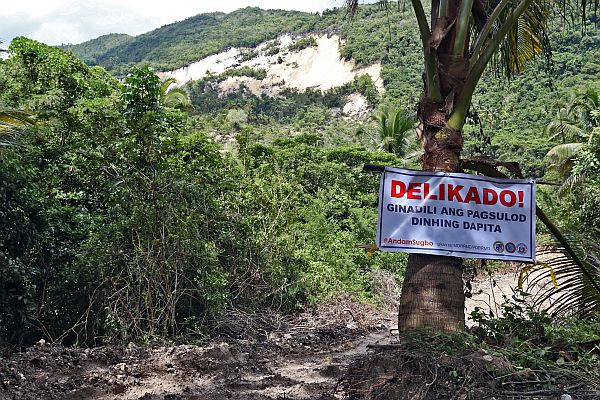 Above, the provincial government disaster office had placed signs in areas warning people to stay out of these areas, which are identified as danger zones.
CDN PHOTOS/JUNJIE MENDOZA

The landslides will likely continue for at least four to six months, the time estimated by experts for the ground in the affected barangays in Boljoon town to stabilize.

“We were told by the MGB-7 (Mines and Geosciences Bureau of the Department of Environment and Natural Resources in Central Visayas) that it will probably take around four to six months before the ground there will stabilize. That’s still quite a long time, and the land there is still moving,” Luche said.

Despite this, Bayani (who asked CDN that he not be named), a 55-year-old former overseas worker, and the owner of a 200-square-meter property in Sitio Camp Franco, an area identified by the state geologists as a danger zone, still refused to leave the area.

Bayani, a mechanical engineer, said he had worked for 10 years in a construction company in Abu Dhabi in the Middle East.

He said that the 200-square-meter property that he purchased and where he built his house is the fruit of his labor.

“I will never leave this place, and I’m confident that our house will not be hit directly by the landslide,” he said.

The house where he, his wife and their four children, live in is barely five meters away from the area where debris from the landslides blocked the 15-km-long Becerril–Nug-as Road in Barangay Lower Becerril.

Bayani and his family are among the 37 families affected by the landslides who continued to refuse to heed the government officials’ and experts’ advice for them to leave the area because of the threat of the continuing landslides there.

The landslide in the mountain villages of Boljoon, a fifth-class municipality located more than 105 kilometers southeast of Cebu City, had not stopped since it started about two weeks ago or on October 27.

The nonstop landslides in the area have prompted the municipal council of Boljoon to declare a state of calamity on six out of its 11 barangays.
These are Barangays Poblacion (town proper), Lower Becerril, Upper Becerril, Nangka, Lunop and San Antonio.

The remaining 37 families (150 individuals), from Sitios Sangi and Camp Franco, were found out by PDRRMO to have remained in the danger zones.

Last Thursday, the PDRRMO issued an advisory to the municipal government of Boljoon to implement a forced and massive evacuation on the residents still staying in the danger zones.

Boljoon Mayor Merlou Derama said that he would implement the order anytime soon.

Derama, however, said that stubborn residents, like Bayani’s family, made it hard for them to do the evacuation right away.

“I already tasked our MDRRMO (Boljoon Municipal Disaster Risk Reduction and Management Office) to implement it right away — once it rains really hard. I also told our ABC (Association of Barangay Councils) to coordinate with the barangay officials in Lower Becerril to inform the residents there about this (order),” he added.

Read Next
Choosing to be happy: An embalmer’s story