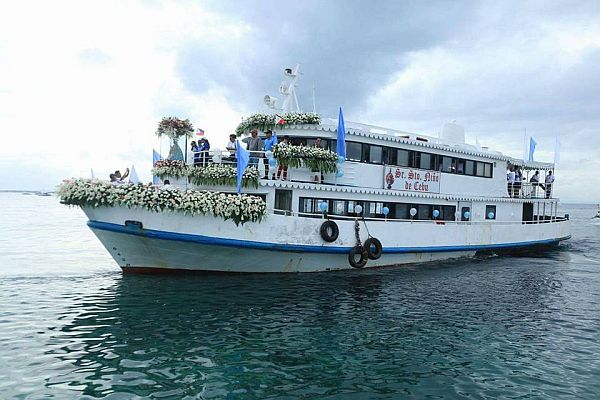 VIRGIN OF THE RULE’S FLUVIAL PROCESSION

Thousands witnessed and joined yesterday’s fluvial procession of the Nuestra Señora Virgen dela Regla or the Virgin of the Rule, the patroness of Lapu-Lapu City, an event marking the start of the celebrations leading to the city’s fiesta on Nov. 21.

Police estimated the crowd at the Barangay Poblacion, who waited and welcomed the image of the Nuestra Señora dela Regla, that was carried by the Sr. Sto. Niño de Cebu galleon during the procession starting at a private wharf in Barangay Marigondon.

“There were at least 3,000 people at Barangay Poblacion waiting for the Virgin Mary and who attended the Mass (welcoming the return of the Virgin Mary at the Virgin of the Rule shrine),” said Senior Supt. Rommel Cabagnot, when asked an estimate of the crowd who participated in the event.

Cabagnot said that this was more than last year’s crowd who welcomed back the image at the Poblacion.

He attributed this to the fluvial procession falling on a Sunday, where most Catholics usually attend Sunday Masses.

Sunshine Alegre, coordinator of the Lapu-Lapu City Tourism Office, said that this was the first time in 17 years that the fluvial procession was held that the galleon was used to carry the Virgin Mary.

Alegre said it was usually a yacht that would be used to carry and bring the image of the Virgin Mary from the Suba-Basbas wharf sailing on the Hilutungan Channel off the waters of Punta Engaño and back to the Mactan Channel to the Muelle Osmeña wharf, which is behind the Virgin of the Rule National Shrine. 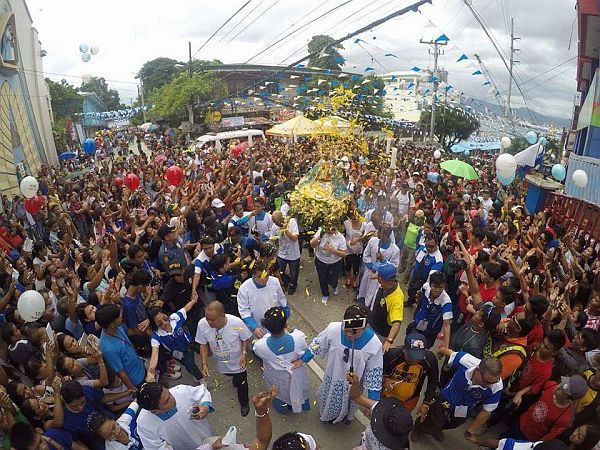 Residents in Barangays Marigondon and Suba-Basbas displayed their altars with images of the Virgin Mary beside the road and decorated flaglets, balloons and flowers at the passage way of motorcade.

They also threw rose petals at the image of the Virgin of the Rule as it passed by them.

Pacific Cebu Resort welcomed the image with a colorful arrangement of flowers in its compound.

At around 8 a.m., the galleon, which was decorated with flowers, set sail along the Hilutungan Channel with the Philippine Navy boats securing the sea event.

The Philippine Coast Guard also served as sea marshals in the fluvial procession.

At past 9 a.m., the galleon docked at the Muelle Osmeña wharf where it was welcomed by city officials, the parish priest and thousands of devotees.

Mayor Paz Radaza and city officials carried the image of the Virgin of the Rule from the galleon to the church.

“Ika-siyam na ni ka tuig nako aning pagpas-an sa Andas (This is my 9th year carrying the Andas) and I felt I am blessed of it which symbolizes sacrifice for the Birhen sa Regla,” said Mayor Radaza.

A group of cultural dancers danced in praise to welcome the image of the Virgin of the Rule as it was carried to the church.

Fr. Bogie Cabrera, the parish priest, celebrated the Mass welcoming the image of the Virgin of the Rule.

Read Next
Fair weather for Cebu this week