DOT in CV  to roll out ‘grand’ project, one-stop pasalubong center to boost Cebu tourism in 2018 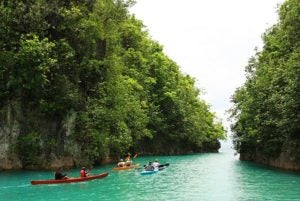 Central Visayas can expect a more vibrant tourism industry as the government is set to roll out more programs in 2018.

The Department of Tourism in Central Visayas (DOT-7) is planning at least three major projects for next year, including a big-ticket tourism infrastructure venture with the private sector estimated to cost “over a billion” pesos.

“I cannot divulge the big-ticket project in detail yet because I still have to iron everything out, but we expect to launch it by January 2018 and inaugurate it on March 16, 2021, which marks the 500th year since Cebu was discovered by the Spaniards,” DOT-7 regional director Joshur Judd Lanete II said in an interview.

Lanete described the upcoming infrastructure project as a “grand” undertaking and that Tourism Secretary Wanda Corazon Teo is committed to supporting his office’s plans.

He said the project will benefit not only Cebu, but the entire country as well.

The DOT is also poised to open a one-stop pasalubong center in Mandaue City next year and is already talking to investors who might be interested to locate in the center.

Lanete said they have acquired a 7,000-square meter property in the Cebu province’s industrial hub to house the one-stop shop that will exclusively feature Philippine-made products such as gifts, décor and food items from all over the country.

“Ther e is still space for expansion in case investors see the need,” he said.

Furthermore, the official said they are talking to companies who would want to invest in water taxis for better connectivity between Cebu City and tourist spots outside the capital.

He said he wants to give tourists access to the southern and northern parts of Cebu, beginning with  Mactan Island; to spare them from the battling traffic in Cebu City when they want to go to the other parts of the province.

Chinese market  The DOT-7 will also mount a road show in China from March to May next year to tap into the Chinese tourist market.

Following the state visit of President Rodrigo Duterte to China in the latter part of 2016, the Chinese government promised to send over one million tourists to the Philippines this year.

“We feel like one million is not a good enough number considering their population and we just opened two new flights to China,” said Lanete.

Based on available data from the DOT-7, China has emerged as the second fastest growing segment among foreign markets in the region between January and April 2017.

The fastest growing market is Taiwan.

China placed behind Korea and Japan in terms of visitor volume during the covered period, but registered the highest growth rate among the three at 77 percent with 126,599 tourists entering the Philippines during the first four months of 2017 compared to 71,180 tourists last year.

To prepare for even more Chinese visitors next year, Lanete said they have sponsored 15 tour guides to undergo Mandarin classes.Aside from road shows in China, he said they are also eyeing doing the same activities in Thailand and South Korea in 2018.

RobustThree months into his stint as the DOT-7 director, Lanete said tourism in Central Visayas has been nothing but robust.

While the region has seen a slight decline in the number of tourists between January and April this year due to several travel advisories issued by other countries as well as the encounter between government forces and the Abu Sayaff Group in Bohol, Lanete was confident they will be able to meet their targets for 2017.

Tourist arrivals in Central Visayas dipped by 3.02 percent during the first four months of the year but figures began rising in May, Lanete said.

“The year 2017 has been vibrant since the time I have been here while 2018 looks great, especially with the opening of a new terminal at the MCIA and the new Bohol International Airport,” he said.

Central Visayas has welcomed close to six  million tourists in 2016 and targets an increase of five percent for 2017, which could have been set higher if it were not for the incidents that happened earlier this year.