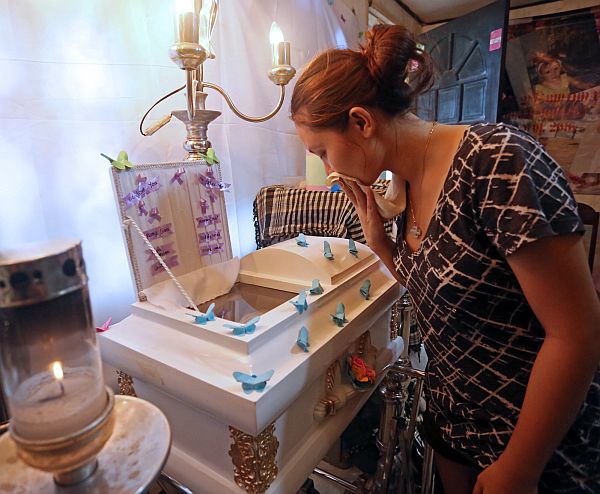 Gian Millecent Igoy views the remains of her son Ghirvaughn Mcreign Limpangog who died three days after receiving Pentavalent shots from a barangay health center in Pajac, Lapu-Lapu City. The three-month old infant was buried last Wednesday as grieving family members plan an autopsy to determine the real cause of his death.
CDN PHOTO/LITO TECSON

The families of the two babies who died last Saturday or three days after receiving vaccination shots from a barangay health center in Pajac, Lapu-Lapu City, want the bodies of their infants to be autopsied to determine once and for all the real cause of their death.

This despite the earlier findings of the Department of Health Region 7 (DOH-7) that the deaths were not due to improper administration of the immunization shots but due to pre-existing illnesses.

Based on the health department’s investigation, four-month-old Ayesha Suson and three-month-old Ghirvaughn Limpangog died last November 11 due to pre-existing illnesses and not because of the Pentavalent shots they received from the health center three days earlier.

“Amo ipa-autopsy ang among bata para gyud mahatagan og hustisya. Di man ta mi mosugot kay sakit gyud sa bata nga ipa-autopsy, pero sa ilang gibuhat,” Lynlen Suson, the mother of Ayesha, said. (We will have her body autopsied so that justice will be served. We initially don’t want to do this but changed our minds because we believe there was negligence on their part.)

No autopsy date has been determined yet by both families.

Ayesha was laid to rest at 1 p.m. yesterday at the Humay-humay Public Cemetery, Lapu-Lapu City, while baby Ghirvaughn was buried Wednesday morning.

Lynlen Suson and Gian Igoy, the mothers of the two babies, also demanded an explanation from Grace Malingin, the health center midwife who reportedly administered the vaccines on the procedure and the preparations done before the vaccination.

According to Dr. Jaime Bernadas, the DOH-7 director, there had been no recorded deaths since the DOH supplied pentavalent vaccines to health centers since 2013 as part of its Expanded Program of Immunization (EPI).

He added that during the designated day of immunization, patients and/or their guardians were informed of the nature and benefits, as well as the expected side effects to the EPI vaccines, a claim denied by both Suson and Igoy.

The parents alleged that they were not asked about the condition of their babies nor informed of the vaccine’s possibe side effects.

They also denied the claims of Dr. Rodolfo Berame, Lapu-Lapu City health officer that only the grandmother and aunt of the babies brought them to the health center for vaccination.

Dr. Ramon Najarro, head of VSMMC’s Department of Pediatrics, said that when the two infants were brought to the government hospital, they were already “in really bad condition.”

Najarro said Limpangog had fever and seizures and was intubated at the emergency room. Baby Suson meanwhile, had cough, diarrhea, and severe dehydration when admitted to VSMMC.

According to Bernadas, DOH-7 will convene experts from the Regional Adverse Effects Following Immunization Committee (Raefic) to conduct an impartial investigation on the two cases.

DOH-7 has temporarily suspended its immunization program in Barangay Pajac, Lapu-Lapu City, upon the request of Mayor Paz Radaza.

Radaza said that if their investigation finds any negligence on the part of the concerned personnel, they won’t hesitate to impose the corresponding penalty.