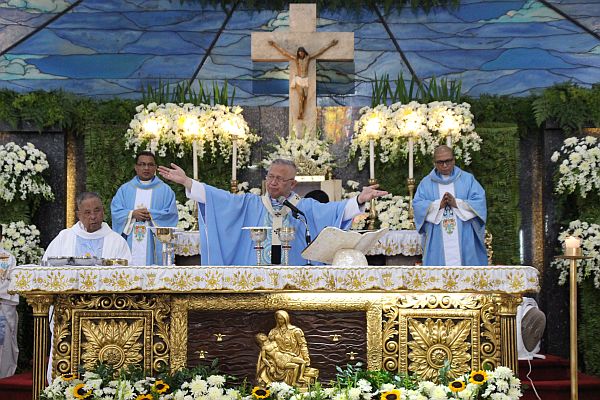 Cebu Archbishop Jose Palma presides over the Mass in celebration of the feast of the Our Lady of the Rule at the Virgen dela Regla National Shrine in Lapu-Lapu City.
CDN PHOTO/SAMMY NAVAJA

CEBU Archbishop Jose Palma urged Catholics to pray for the country’s lawmakers as he expressed fear about the consequences of the dissolution of marriage bill now pending before the Lower House.

In his homily during the 10 a.m. Pontifical Mass at the Virgin of the Rule (Birhen sa Regla) parish in Lapu-Lapu City, he urged lawmakers to make laws pleasing and in accordance with the laws of God and not in contradiction to what God wants his people to be.

He also urged the devotees who flocked to the church for the fiesta of the Virgin of the Rule to follow the urgings of the apostle Paul — to pray for the leaders of the country that they may guide the people to righteousness and be enlightened to enact laws in accordance to His statutes that will bring eternal happiness.

Interviewed by reporters after the Mass on the proposed bill for the dissolution of marriage set to be passed by the Lower House before Christmas, Palma said he is afraid of its consequences and “we feel we’re beginning to be scared and feel its consequences.”

He said couples may no longer work as hard to keep a marriage together because there is now an easy way out.

“Marriage is sacred. It is the will of God. Couples should try to live out to be generous with each other, to love each other and even to the extent of sacrifice. Many times they are happy and sometimes not. That’s part of life,” said Palma.

He said the Catholic Bishops’ Conference of the Philippines (CBCP) will soon convene to discuss the matter.

“I’m sure they will meet in this regard, but as always, any move will certainly be to retain and to proclaim the wonderful teaching of the Lord,” he said.
“We are afraid given the tendency, the implication. Many are saying that Catholics tend to curtail our freedom, we’re supposed to be free, happy, but we don’t see freedom in that way. Freedom is not just doing what we like; it is the way that is good, it is the way of service to one another. My freedom to enjoy is when others are affected, no longer benefited, no longer happy, things like that,” Palma added.

He said they are now praying for the enlightenment of House Speaker Pantaleon Alvarez, the bill’s sponsor.

A long queue of devotees endured long hours of waiting just to be able to kiss the image of the Virgin of the Rule at the shrine located at the back of the parish.

Editha Puno, 55, of Tabogon town in northern Cebu, was thankful she was able to visit the shrine this year, as this was her devotion to the Virgin of the Rule, to come during the fiesta to petition good health.

Josie Lopez, 66, of Guadalupe, Cebu City, has been a devotee of the Virgin of the Rule since she was a child. Her parents brought them there every year during its fiesta to venerate and express thanks to the Birhen sa Regla.

A group of devotees from Jetafe, Bohol, on board a motor banca arrived early at Muelle Osmeña wharf to hear Mass, light candles and offer flowers to the Virgin of the Rule.

Roel Bontuyan, a fisherman from Barangay Handumon, Jetafe, Bohol, brought his family and his relatives to Lapu-Lapu City to celebrate fiesta and attend Mass at the church.

They brought their own lechon and other food and drinks in the boat and ate together to celebrate the fiesta of the Virgin of the Rule.