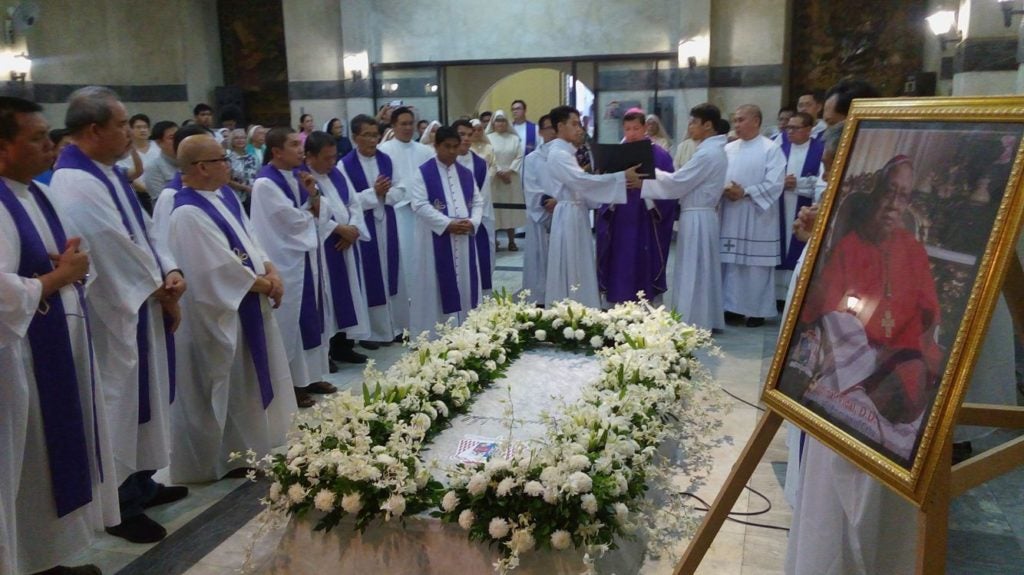 So was the message of Cebu Auxiliary Bishop Dennis Villarojo as Cebuanos on Monday marked the 40th day since the death of Archbishop Emeritus Ricardo Cardinal Vidal.

Villarojo, who served as Vidal’s private secretary for over a decade, presided over a Mass at the Cebu Metropolitan Cathedral at 4 p.m. and prayed over the cardinal’s tomb at the church’s mausoleum.

Retired Bishop Emilio Bataclan and at least 20 priests concelebrated with Villarojo who temporarily takes over the archdiocese while Cebu Archbishop Jose Palma is attending Pope Francis’ apostolic visit to Myanmar from November 27 to 30, 2017.

In his homily, Villarojo said celebrating the 40th day since the death of a person has become a part of tradition to echo Jesus’ ascension into heaven 40 days after the Lord rose from the dead.

Although the 40th day after death is being practiced especially in the Philippines, he said it does not form part of the Church’s doctrine.

“It is rather a tradition that helps us overcome our grief and to move on with our lives. And moving on means taking up the mission that all of us have been given as Christians, and that is to proclaim the Gospel, the joy of the Gospel, and not being paralyzed by grief or whatever emptiness we feel at the death of a beloved,” he explained.

The best way to commemorate and celebrate the life of Vidal, he said, is to carry on what the cardinal had started.

“The Lord has taught us that there is a connection between life and death. That is why we should never allow our grief to overwhelm us, neither in life nor in death. Because for a Christian, there is not much difference between living and dying,” Villarojo said.

“Each day we live, we also die by denying what we want for the sake of others. That is what love means. At the moment of death, we die, but not in a total way, because death means also the overcoming of mortality and embrancing of eternity. Christian life will always be a paradox. . . the fact that Jesus has died for us, and yet he continues to live,” he added.

In an interview after the Mass, Villarojo said he would always miss Vidal whom he considered as his father.

“I always remember the cardinal as good father to me. I will always miss him. But as I said, we have to let go and move on because there are a lot of jobs to do,” he said.

Vidal served as archbishop of Cebu, the biggest archdiocese in the country for 29 years, before he retired in 2011. The cardinal died last October 18 at the age of 86.

Read Next
Cebuanos told to prepare for ‘weak’ La Niña