When Christmas comes for Adlaon kids 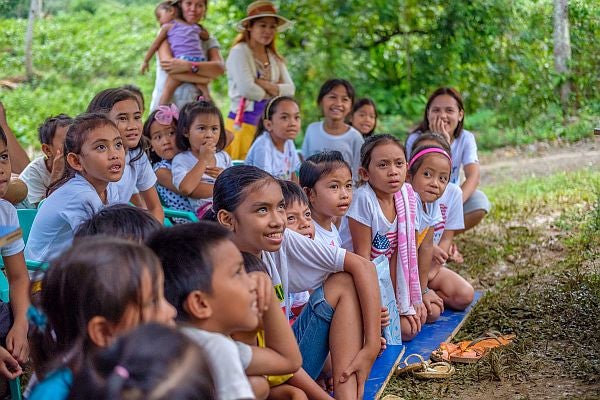 The children of Barangay Adlaon are part of Project Kaalam, a literacy and numeracy initiative of TOSPian Lhyn Arcilla, a young private school teacher who hails from the same village.
PHOTO BY MARC LOUIE YAP

Rayver Cleve Ardita, 10, knows what an apple is as it often comes out in school discussions. But he has never tasted one.

That is why for Christmas, Rayver and 59 children of Barangay Adlaon, a mountain village located 28 kilometers from Cebu City wished that Santa Claus would give them apples.

On December 17, Sunday, “Santa Claus” arrived in the form of 11 members of the Ten Outstanding Students of the Philippines Alumni Community (TOSP-AC) Central Visayas to fulfill their wish.

The road was muddy and slippery when the TOSP-AC group arrived in the village at around 11:00 in the morning.

Just hours earlier, Typhoon Urduja damaged some of the crops in farms across Barangay Adlaon and houses were left roofless.

Until the time of this writing (December 19), there has been no electricity in the village since December 15 as electric lines were cut off by strong winds.

Around noontime, the grown-ups in the barangay had finished cooking a sumptuous lunch of utan bisaya (vegetable soup), dried fish with tomatoes, pork afritada, boiled bananas with ginamos (brined anchovies) and chicken adobo courtesy of TOSP-AC.

“We wanted to have a Christmas celebration that goes beyond exchanging gifts with each other or stuffing ourselves with so much food. We thought it is best to spend TOSP’s Christmas party here,” said Edilyn Lopez, TOSP-AC Central Visayas chairperson.

Lopez, who teaches tourism and hospitality management courses at the University of Cebu, gathered pledges and donations so that TOSP-AC members could buy apples, school supplies, toys, candies and food for Adlaon’s children and their parents.

TOSP-AC is composed of former finalists and awardees of the TOSP search which was established in 1961 to commemorate the 100th birthday of Philippine hero, Dr. Jose Rizal.

It was revived in 1989 when democracy was restored.

TOSPians are chosen for their track record in academic excellence, leadership and community service grounded on good moral values.

“While one achiever’s TOSP journey begins with the award, we endeavor to go beyond the recognition and serve communities through projects initiated by fellow TOSPians or partners,” said Lopez.

For this year’s TOSP-AC party in Cebu, Lopez said that they have decided to support Project Kaalam, a literacy and numeracy project initiated by TOSPian Lhyn Arcilla,

Arcilla’s neighbors, two four-year-old children, went to her home and asked her to teach them lessons.

The following day, the two children brought 50 of their friends to Arcilla which made her decide to hold a 20-day summer literacy class.

The project has since continued and to this day, Arcilla holds classes every Sunday to augment the children’s learning from the nearby Adlaon Integrated School.

She does this while juggling her responsibilities as teacher at Sacred Heart School-Ateneo de Cebu and studying her Master of Arts in Education (Major in Educational Management) every Saturday.

“My parents are farmers. They worked hard to send me and my sister to college. I feel that teaching these children is the least I can do for the community that nurtured me to become who I am,” said Arcilla.

“She gives incentives to those who get perfect scores. Incentives such as five pesos to those who do well in school. She also provides free snacks during the sessions,” said Ardita.

Amelia Miñoz, 42, who saw Arcilla grow up in the mountain village attested to her helpful nature.

“She is also talented and uses her talent to be a role model to children in our community. She brings honor to all of us,” said Miñoza.

“Christmas is best spent with people who deserve the love and blessings this season. We are happy to be the bearers of joy and surprises to them,” said Lopez.