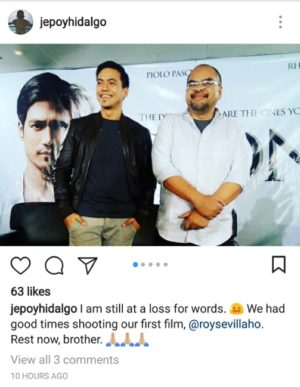 “All we know for now is the probable cause was a stroke and he’s been gone for a couple of days na,” Mabilog said.

Ho’s family had been looking for him since Monday.

“He was found lifeless in his house and he was found around 10 p.m. last night by the owner of the house who’s also a friend,” Mabilog said.

“Thank you direk for being so nice to me. For being a friend and a director. I truly appreciate your passion sa craft mo. It was a great experience na makapagbatuhan ng story ideas with you. Rest in peace direk! I will pray for your soul,” Imperial said.

The actress said they were planning to do another project like “Mariposa” for Sari Sari Channel.

Ho is known for his debut film titled, “Silong” in 2015 which he co-directed with Jeffrey Hidalgo. It starred Piolo Pascual and Rhian Ramos.

Hidalgo shared photos on his Instagram account and said, “I am still at a loss for words. We had good times shooting our first film, @roysevillaho. Rest now, brother.”

Before transferring to Manila, Ho worked as a copy editor for a local newspaper in Cebu City.

“You were a brutal editor. You would call me out on shitty writing back when I was just starting as a reporter. But I learned a lot from you,” wrote Bronce.

Read Next
DOT to launch faith-based tourism campaign this year