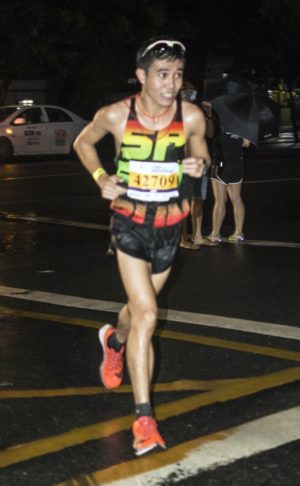 Spectrum Runners Club’s ace runners put on a dominating performance by sweeping the titles in the local division of the rain-drenched Cebu Marathon 2018 yesterday.

“This is the most titles won by our running club,” said Spectrum Runners Club president Gerry Mayo, who founded the club in 2013. “These achievements of our runners motivates and inspires our other members to strive harder. We have this winning tradition because we don’t want any member of our club to get left behind so we always help each other like family.”

Highlighting the success of the team was the victory of the Hinigiran, Negros Occidental-native Pescos in the 42-kilometer race.

The 24-year-old Pescos managed to defend his title despite catching a fever due to tonsillitis on the eve of the race.

With his body still recovering from the fever and fatigue from joining two marathons in a span of a month, Pescos still bagged the title after crossing the finish line at the Cebu Business Park first with a time of two hours, 42 minutes and 54 seconds.

“I just got lucky,” said Pescos, who just turned 24 last January 10. “I was doubtful of my chances to defend my title because I got sick and I am fresh from competing in two separate marathons. I did not even train. I just jogged every day and did some long distance runs before the race.”

Even without proper training, Pescos seemed to be in perfect condition as he was way ahead of his runner up Azlan Pagay, who finished in 2:55.16. Paul James Zafico finished third with a time of 3:03.17.

Just like Pescos, Abella was also not able to train for the race but still went on to win the women’s 42k race by clocking 3:16.25.

“I was not expecting much from myself in this competition because I did not train for this run since I wanted to enjoy the holiday season. I am just happy right now that despite the lack of preparation, I was able to perform my best and win the title,” said the 28-year-old Abella from Minglanilla town, south of Cebu.

While Pescos and Abella managed to pull off the victories despite the lack of training, Lee came in well prepared en route to winning the 21k men’s title for the third straight year.

“I am very happy for this accomplishment. This rarely happens so this is a very special moment for me,” said Lee, who expressed his interest to join Pescos and Abella in the 42k distance soon. He finished the 21k race in 1:13.42.

Read Next
Participants speak up: This year’s race better