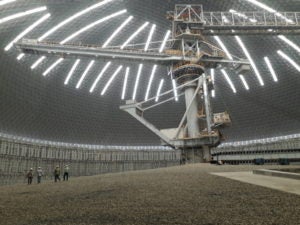 The Visayas area could expect additional power supply this year.

The power plant, which is owned by AboitizPower subsidiary Therma Visayas Inc. (TVI), is one of four hydro and baseload plants to be opened by the firm this year in different parts of the country.

“The entry of these plants will significantly support the country’s energy reserves and will show that the Philippines is open for business and investments, said AboitizPower President and COO Antonio Moraza said in a press statement.

The firm earmarked around P41 billion for the project which began construction in April 2015.

As of January, AboitizPower officials said the baseload power plant project is already at 90 percent completion. It is expected to go online within the first half of 2018.

“Atong demand karon is igo-igo gyud (Right now, our demand is at breakeven). If there’s additional power plants coming in, that’s welcome because our economy relies on power. If there’s not enough power, we will have problems in our industries and our residential areas,” he said.

Gonzales pointed out though that power providers like AboitizPower should also coordinate with the National Grid Corporation of the Philippines (NGCP) to see to it that their transmission lines are capable of receiving additional capacity.

The DOE receives power supply-demand reports from the NGCP daily, which vary on certain days and times.

But based on general trends, Gonzales said that right now, existing capacity is just enough to meet daily demands.

“So if there’s additional supply, it means our power industry will be stable. This will lessen power interruptions and load drops. Usually, load drops come in when lines are being repaired or under maintenance,” he added.

Based on yesterday’s records, there was a recorded -30 MW in the gross reserves for Visayas yesterday evening. Negative reserves usually force distribution utilities to implement rotational power interruptions to meet demands.

Aside from the TVEP in Cebu, AboitizPower is also set to go online with other plants in the country.

These include the recently completed construction of the 8.5-megawatt Maris Canal hydro project in Isabela which is in partnership with SN Power; its wholly-owned subsidiary Hedcor is also wrapping up construction of a 68.8-megawatt hydro plant in Manolo Fortich, Bukidnon.

They are also completing their 400-megawatt Pagbilao 3 baseload power plant in Quezon.

Read Next
Pagasa says rains in Cebu this week