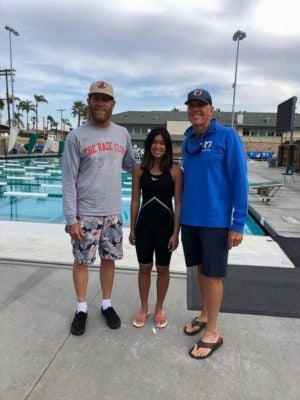 This after the country’s top junior swimmer from Aklan beefed up her skills by undergoing a month-long training in one of the United States’ Olympic training camps for swimming last month.

Soguilon’s father and mentor Kokoy told Cebu Daily News (CDN) that the 13-year-old multi-titled tanker trained in the US under the tutelage of renowned American Olympian gold medalists Garry Hall Sr. and his son, Garry Jr.

“I believe that her training camp there was very productive. I believe she is now a better swimmer when she comes back here,” Kokoy told CDN.

Kyla started her training camp in the US last December 16 and spent the holiday season there. She had her training at the Race Club Swim Camp in San Diego, California, which is owned by Hall Sr.

“Their training camp there is scientifically-based. I saw her improvements personally because her coaches sent me videos regularly. I can see that her form, as well as her strokes, have improved tremendously and her time is faster than ever.”

Kokoy said Kyla is expected to return to the country today.

Soguilon is a three-time Philippine Sportswriters Association (PSA) junior athlete of the year awardee and a two-time Most Outstanding Swimmer of the Palarong Pambansa.

She is expected to show off her bolstered form in the Western Visayas Regional Athletic Association (WVRAA) next month in Iloilo. She will then compete for the first time in the secondary division in the Palarong Pambansa this April in Vigan, Ilocos Sur.