Making tourists stay longer in Cebu after the Sinulog 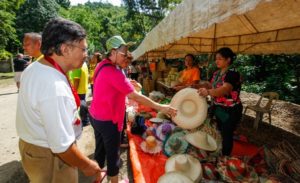 Tourists check out buri hats on display in the Barili stop of the 2014 edition of the Suroy-Suroy Sugbo. Organizers this year are promising new additions to the tour package to give participating visitors a new Cebu experience.
CDN FILE PHOTO

It is typical to see Cebu City’s streets filled with locals and tourists, both domestic and international, during the Sinulog weekend.

But right after the culminating Sinulog Grand Parade every third Sunday of January, almost all of these tourists rush home to their respective provinces or countries.

So what should be done to makes these tourists stay just a little bit longer and experience what else Cebu has to offer?

Tourism stakeholders shared their thoughts on the need to entice Sinulog-drawn tourists to experience the rest of Cebu.

For one, there has to be new offerings and innovations on tour packages and attractions offered by the province, according to an official of the Cebu Association of Tour Operations Specialists (CATOS).

CATOS President Alice Queblatin said that Sinulog has always been a chance to make tourists and balikbayans experience Cebu and also what’s new in store for them.

“Among the comments of balikbayans now is that traffic has become worse. But in spite of that, they still look at Cebu as a place to come back to. It is still a positive opportunity to push for Cebu as a destination for leisure,” Queblatin said in an interview on Wednesday.

And with the thrust of Department of Tourism (DOT) Secretary Wanda Teo for faith tourism in Central Visayas, she said the Sinulog Festival will continue to be a huge factor.

While the number of tourists significantly drop right after Sinulog, Queblatin pointed out that there are still programs to make them stay a bit longer.

She said that one of these is the Cebu provincial government’s Suroy-Suroy Sugbo program.

Every year, right after the Sinulog festivities, the Capitol offers its tour package for the southern part of Cebu.

This year, the tour activity will be held from January 24 to 26.

Queblatin also assured that Catos, which had been helping and supporting the program, would be offering something new in this year’s edition of the Suroy- Suroy Sugbo.

“We’re giving it a twist. We are creating more interest in the adventure trail in the south which has always been popular among the millennials,” she said.

So the Suroy-Suroy in the south will focus on the whale shark watching in Oslob, canyoneering at the Kawasan Falls in Badian, island hopping in Moalboal, and the sardine run in Pescador Island.

“We are putting it together into a package to give balikbayans who will remain after Sinulog an interest to go further in the countryside,” she added.

It also helps that hotels, which would usually increase their rates for the Sinulog would offer cheaper rates right after Sinulog weekend.

Queblatin said that CATOS is also studying more tour packages in Cebu which include an “honest-to-goodness” food trip tour.

She explained that food had often been regarded as just another part of the tour and that it would be interesting to develop a package that would only focus on food offerings which Cebu also had a lot to boast of.

Plans to create a shopping tour package are also being looked into.

Queblatin said that this kind of tour package is being considered because there is a need to feature more of Cebu’s handicraft and souvenir products.

For the hotels, restaurants and resorts sector, the stakeholders are also offering tour packages to their guests to let them stay longer and enjoy Cebu.

Carlo Suarez; Hotels, Restaurants, Resorts Association of Cebu (HRRAC) president, said that while hotels are already fully booked this Sinulog weekend, hotels are reportedly between 50 to 60 percent occupancy rates the week after Sinulog.

“There’s really a big difference after Sinulog. But we are also offering tour packages for our tourists who consider staying longer. Some are getting, some are not getting. But more of them are inquiring,” Suarez said.

Despite this, Suarez said he remained positive of Cebu’s tourism prospects for this year.

“This year is really promising because there are already a lot of tours that we could offer. We already have tours to the countryside which is in the south like Aloguinsan, Oslob, and the canyoneering. There’s still a lot that can be offered in the south,” Suarez said.

Another new offering in Cebu that could attract tourists, he said, is the soon to be opened Safari Park owned by the Lhuilliers in the northern Cebu town of Carmen which is also set to be opened to the public this year.

Air Juan is also set to start its operations of seaplanes coming in and out of Cebu going to nearby islands within the first quarter of 2018.

According to Paolo Misa, Air Juan marketing head, they will soon be opening their seaplane terminal which will be at the South Road Properties (SRP).

“We are targeting to reach areas where there is no access to runways or airstrips,” he said.

They target to start with three routes from the SRP seaplane terminal. These are Camotes Islands, Kandaya Resort and Malapascua Island, and in Candijay town in Bohol, which is the gateway to Anda town that is becoming increasingly popular for its pristine white sand beaches.

The Bohol route will also have a stopover at Panglao Island.

“We want to maximize the activities on Holy Week so we target to start operations by late March,” Misa said.

He, however, said that they had yet to release the final price matrix for their flights.

Air Juan started operating in Cebu last year. But they have been limited to chartered flights and land planes coming in and out of the Mactan Cebu International Airport (MCIA).

Their routes include Siquijor, Bohol, Maasin, Biliran, Bantayan, and Sipalay.

Cebu City Mayor Tomas Osmeña said in a press briefing on Thursday that the launching of the Air Juan seaplane route in Cebu and some parts of the Visayas with a seaplane terminal here in the SRP would improve Cebu’s tourism image.

Osmeña also cited the convenience of taking a seaplane to their island destinations than taking the airport in Mactan route.

With these developments, tourism stakeholders in Cebu are hoping for more tourists to stay longer and hopefully they can help maintain Cebu’s standing as a top tourist destination in Central Visayas.

Based on records from the DOT-7, 2.98 million tourists have visited the region from January to June of last year.

Of this number, 2.25 million tourists came to Cebu. /With a report from USC Intern Therese Mae Alegado

Read Next
SPAR WITH THE CHAMP