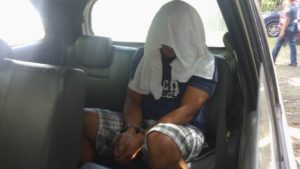 Tourist van driver Gilbert dela Cruz, in handcuffs, covers his face with a towel as reporters approached after a criminal complaint for homicide was filed against him at the Cebu Provincial Prosecutor’s Office on Tuesday, Jan. 23, 2018, in relation to the road accident in Alegria town, southwest Cebu on Saturday, Jan. 20, 2018, that killed seven Filipino-Americans who were touring Cebu.
CDN PHOTO/ADOR VINCENT S. MAYOL

Forgiving the driver of the tourist van who was asleep at the wheel and rammed into a roadside mahogany tree in the southwestern Cebu town of Alegria, which led to the death of seven of its 10 passengers, is an absurd idea for the families of the victims.

“Napakasakit para sa aming pamilya ang nangyari. Hindi maipaliwanag ang sakit na aming nararamdaman. (It is so painful for our family to accept what happened. It is hard to explain what we feel),” said 74-year-old Sonia Ignacio-Punzalan who lost her younger sister, Diana Pascual, in the vehicular accident.

A criminal complaint for reckless imprudence resulting to multiple homicide and multiple serious physical injuries was filed by Punzalan and four other complainants against tourist van driver-operator Gilbert Dela Cruz at the Cebu Provincial Prosecutor’s Office on Tuesday.

When presented to Cebu Provincial Assistant Prosecutor Raymund Aller, Dela Cruz opted to waive his right to a preliminary investigation, which could have given him the chance to refute the allegations against him.

This being so, the prosecutor recommended the filing of charges against the respondent at the trial court in Oslob town in southern Cebu, which has jurisdiction over incidents in Alegria town.

The case will be formally filed in court today (Wednesday). Bail was recommended at P40,000.

If found guilty by the court, Dela Cruz will have to spend six to 12 years in prison.

Dela Cruz, 44, and a resident of Barangay Guiwanon in Argao town, refused to issue any statement to the media.

But police investigators in Alegria town said that Dela Cruz, who was driving a Toyota Grandia van, admitted to dozing off on the wheel while traveling at high speed on their way to Badian from Oslob town past noon last Saturday, January 20.

Dela Cruz only sustained minor wounds on his knees and elbows but seven of his passengers died while the three others remained in the intensive care unit at the Chong Hua Hospital in Cebu City.

The passengers were all Filipino immigrants to the US who were in the Philippines for medical missions but who had decided to spend a holiday first in Cebu. They had gone whale watching in Oslob and were on their way to Kawasan Falls in Badian when the accident happened in Alegria.

‘We could not forgive’

Punzalan lashed out at Dela Cruz for not taking the proper measures to ensure the safety of his passengers.

Even if the victims were all residing in the United States, Punzalan said their families would not take a step back or withdraw the case against Dela Cruz.

She said they already asked their lawyer to take care of the case even if they would not be able to attend most of the court proceedings.

Punzalan, who is also a US immigrant now residing in New York, rushed to Cebu after learning of the sudden demise of her sister.

“If this were a plain accident, we could have forgiven him (Dela Cruz). But this case is different as deaths could have been avoided if he (did) the right thing. We could not forgive him,” Punzalan said.

“Sagasaan ko man siya, hindi pa rin sapat iyan. (Even if I ran over him, that is still not enough),” she added.

Still confined at the ICU of Chong Hua Hospital were Dr. Elenita Rubio, wife of Nunilo; and spouses Fred and Nora Tsai of Chicago.

The victims were all Filipino immigrants in the United States (balikbayans), working as nurses and doctors. They were in Cebu for a vacation last Saturday.

The victims were part of several volunteers who were supposed to hold a medical mission organized by the Philippine Medical Association of Chicago (PMAC) and its Women’s Auxiliary in Camiguin Island starting last Monday, or two days after the accident.

The bodies of the Huang couple were claimed by relatives and transported from St. Peter’s Memorial Homes in Cebu City to Alabang in Muntinlupa City last Sunday.

The bodies of the other victims are also set to be claimed by their relatives within the week.

The PMAC has been sponsoring these medical missions early in every year for about four decades now, bringing with them dozens of balikbayan boxes of medical supplies and medicine to treat an average of one to two thousands indigent patients each time.

“They could have helped the community a lot,” Punzalan said.

The families and friends of the other victims also blamed the driver for the accident.

In his complaint-affidavit, Joy-Alvi Arañas, nephew of Nunilo, said Dela Cruz did not exercise the caution while driving.

“Without over-emphasizing the obvious, respondent was very negligent in driving his van towards a mahogany tree that resulted in the death (of the victims),” he said.

“An ordinary, prudent person in the given situation would have made sure that he was in his right senses and that he is alert before driving a van that was ferrying 10 passengers at that time. This was not clearly observed to say the least,” he added.

The families of the other victims have yet to file a case against Dela Cruz, who is detained at the Alegria Police Station.

The Cebu Provincial Board is conducting an investigation on the accident after Cebu Vice Gov. Agnes Magpale found out that the Toyota Grandia driven by Dela Cruz was not an accredited vehicle of the Department of Tourism (DOT).

Magpale said they are planning to come up with an ordinance to regulate and monitor tourist vehicles in Cebu. /with reports from Inquirer

Read Next
Tourists urged: Use only legitimate transport providers