Medyo Maldito and I 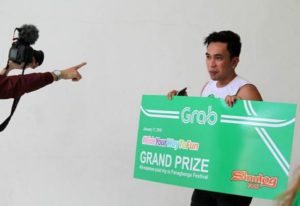 Ask— “Are you really single?”

Based on the frequency of selfies requested by the ladies who have interrupted us on our way to Plaza Independencia, Medyo Maldito is the Piolo Pascual of his league.

They giggle in thrill as he joins them for a photo, then two more sets of another pose.

I am waiting for him nearby — without being noticed or given the courtesy to join them.

On this humid Wednesday morning of the Sinulog week in Cebu, the video blogger and I are in tandem for a mini “Amazing Race” spin-off from Bayfront Hotel to Plaza Independencia to launch a treat from Grab Philippines.

There were six groups of duos, competing for the prizes at the last stop, including Divine Maitland-Smith, Jomie Hospital and Paul Jake Castillo.

Like the famous reality show, the instructions of the next destination are enclosed in an envelope after completing a specific task.

“I take jeepneys, sorry,” I replied, convincing him that my mobile data has reception problems.

But the truth is, I am not technology savvy. I have no app on my mobile except Facebook, Messenger, and hardly Instagram. Of course, I should not tell him this because all the more his adoring fans would thinkI am his tito.Ah, tito problems.

I have to look as cool, you know, even if my worn-out Jul Oliva shirt has already projected a “more mature” image against his outfit of the day.

Even the fashion designer has abhorred this never-ending repetition of this particular garment she created herself:

For the record, a midnight blue cotton shirt with slightly diagonal mustard lines, running from the hem up to the neckline that I wear at least twice a week since the summer of 2017.

I did not even comb my hair today.

After rebooting his phone, in two minutes, our ride arrives.

We sit in the back seat; the girls outside peer into the window of the car, bidding him goodbye. I bet they would want my place this time of the day.

After all, Medyo Maldito has become a sensation through his “hugot” materials on his social media portals and his compositions on the airwaves — “Pero Atik Ra,” “Hahahasula” — have been immortalized by the hopeless romantics of the world.

We disembark at the front entrance of the Fort San Pedro. It should not be about the age gap, but I am running two meters behind him. This guy can run fast.

We have to search for the Grab Philippines booth among the many stalls at the far end of the park where two challenges await us: Either finding our way through the miniature maze using Match Box cars or spelling the word “grab” with M&M’s.

Also at the booth, we have bought merchandises paid through the rewards points loaded on his account (the mobile payment option).

After accomplishing the word in colorful choco-coated peanuts, we are tasked to look for the Grab lady wearing an oversized Sinulog headdress.

A selfie of the three of us is captured, which Medyo Maldito posts immediately on Instagram with the hashtag #RideYourWayToFun, which now has over 3,000 likes. Thereafter, we receive the next and last destination.

His name is whispered among a convening bevy of young girls ogling at him.

“Tito, pikchuri mi niya,” the girl smiles at me and hands me her cellular phone.

Medyo Maldito then books another ride to House of  Lechon on Acacia Street, meandering through the moderate traffic congestion between Jakosalem Street and Gorordo Avenue.

We didn’t win the race, but for all the relationship talks we have had, many of you would kill to be in my position.

“Hala, grabeha ug mga chicks nimo. The girls love you,” I laugh as we settle ourselves in another Grab car ride. “Are you really single? Basin pa-asa kaayo ka nila.”