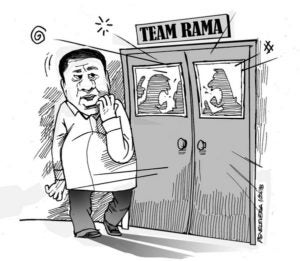 The councilor said this in response to the mayor’s Facebook post in which Osmeña claimed that there was infighting among the ranks of the Team Rama camp at Garganera’s office.

“I am receiving reports that a heated debate is ongoing in the office of Alastor Moody (Garganera) in City Hall between Mr. (former mayor Michael) Rama and the rest of (Barug Team Rama),” Osmeña said on his FB post.

Osmeña also said on his FB post that some of the councilors allied with Team Rama want to support another mayoral candidate and not Rama.
Garganera chided the mayor, saying they were not quarreling that time.

He said he invited the other councilors under Barug Team Rama including Cebu City Vice Mayor Edgardo Labella for coffee in his office after the City Council session ended early last Tuesday.

Garganera said they were all invited to a birthday celebration later that evening.

“So (while we waited) what we did, we had fun in my office. We had a karaoke session and laughing out loud,” Garganera said.

“It’s just a product of his (Osmeña) imagination. It’s funny,” he said.

But Garganera admitted that the mayor’s claim stemmed from Labella’s appointment as the head of the Partido Demokratiko Pilipino-Lakas ng Bayan (PDP-Laban) Cebu City Chapter. Labella said he is open to running for mayor in next year’s election.

Garganera said Team Rama supports whatever decisions made by their members.

Read Next
Asleep behind the wheel