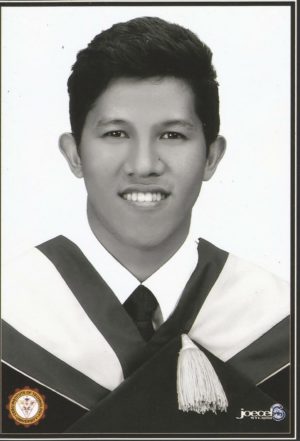 Ian Dave Cordova, 23, is color blind. Because of this condition, he can hardly distinguish the colors red and green.

But Cordova, a graduate of Architecture in Cebu Institute of Technology University (CIT-U), can see a better and brighter future ahead after he made it in the top 10 of the recently concluded Architect Licensure Examination (ALE) held last month.

Cordova, who hails from Bantayan town in northern Cebu, got an 83.10 percent score in the licensure exams, which is good enough to land him in 7th place among the 1,126 examinees who passed the exams.

According to the Professional Regulatory Commission, 1,955 examinees took last January’s board exams, which was topped by Marc Henrich Go from the University of Santo Tomas (UST). Go got an 85.40 percent score.

Cordova was the only Cebuano who landed in the top 10.

“I am happy because I got two blessings in one day,” said Cordova, when asked on Friday about how he felt being one of the board topnotchers.

The other blessing he was referring to was his mother being discharged after a five-day stay in the hospital because of stomach pains.

He recalled how his being amazed at seeing high rise buildings in television when he was 12 years old inspired him to go into designing buildings and forge a path to an architecture course.

He was set on taking architecture that he even defied his mother’s wish to let him take a Marine Engineering course instead.

His decision paid off with his topping the board exams.

But taking the board exams was not a piece of cake for the CIT-U graduate. It was a lot of hard work.

“Magstart ko og tuon og 1 a.m. until 10 a.m. Mao gyod nay time na makafocus ko kay wala may distraction (I would start studying at 1 a.m until 10 a.m. It was the only time that I could focus on my studies without any distraction),” he said.

He also would take an hour for every two hours of studying.

He said it was important to develop a study habit and to manage one’s time.

Imelda, his mother, and a public teacher, said that Ian, who was the second of five siblings, was already an achiever since elementary years.
She said that she was not however expecting him to top the exams but just to pass it.

“Wala ko mag expect nga ma top siya, pero ang ako lang gyod gipangayo nga makapasar siya. Salig man ko kay ako sab nakita nga subsob ang iyang pagtuon (I did not expect him to top the exams, but I only wished for him to pass it. I believed in him since I saw the hard work he put in his studies),” she said.

Their house in Barangay Kabangbang, Bantayan is an example of his talent and creativity as he was the one who designed it.

Ian said while supertyphoon Yolanda in 2013 devastated the north including their house, it also presented him an opportunity to use his talents.
He was third year in college, when Ian sent a blueprint of the new design for the rebuilding of their house in Bantayan.

“Daghan kaayo nakaingon nga kinsay ilang panday kay unique man gyod siya ug walay kapareha (A lot of people asked who was our carpenter because the design of our house was unique),” said Imelda about the house that their son designed.

Read Next
12 traffic enforcers get P2K reward from Tom