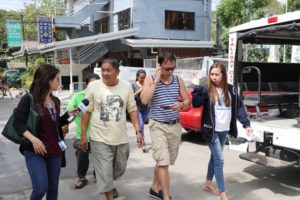 “We received a word from her that she is going to surrender. But she has yet to show herself to us,” said Talisay City Police Director, Supt. Mari Conag, in an interview yesterday.

“It would be best if she will surrender,” he added.

The alleged mastermind, Edna Cabañog is the mother of Oberes’ rumored mistress, 20-year-old Resamie Cabañog, who is now detained at the Talisay Police Station together with her boyfriend, Joshua Garciano.

A murder complaint was filed against Resamie and Garciano at the Talisay City Prosecutor’s Office on Friday afternoon. The cases against Edna, a certain Tomas Isugan, and two unidentified men will be filed next week.

According to the police, Oberes, 37, was mauled and shot by the suspects in one of the driveways inside Corazon Village in Barangay San Isidro, Talisay City before his body was transported to and burned in Carcar City at around 9 p.m. on Wednesday.

With the help of informants, police subsequently arrested Resamie and Garciano during a follow up operation. The other suspects remain at large.
Oberes’ body was identified by his family through his car, necklace, and part of the vehicle’s receipt which was partly burned.

In a press statement, the Oberes family appealed to the public not to disseminate speculations while the investigation continues.

“The family was devastated with the news. Our close-knit family has lost a great man. We keep reliving what happened to him and we’re deeply saddened and hurt. Speculations are not needed at this time,” the statement read.

“Nothing can bring Mark’s life back, but the people responsible need to be caught and prosecuted to the fullest extent of the law. At this time our family is trying to pick up the pieces and honour Mark’s memory, and we’re hoping that is everyone’s main focus right now. Healing is what the family needs and we appreciate everyone’s understanding in that.”

Bert Padilla, spokesperson for the family, said they will answer reports on Oberes’ alleged relationship with Resamie in due time.

Oberes’ remains lie in state at their residence in Lapu-Lapu City.

Based on the police investigation, Oberes, who is married with two teenaged sons, had an illicit relationship with Resamie for some time.

When Resamie decided to broke up with Oberes, the victim allegedly threatened to post their sex acts on social media.

Resamie’s mother learned about it and allegedly hatched a plan to kill Oberes.

Garciano, the rumored boyfriend of Resamie, admitted that he who drove Oberes’ Suzuki Ertiga when the victim was transported from Talisay City to Carcar City.

In an interview, he said Edna repeatedly stabbed Oberes inside the vehicle.

When they arrived at the mountain barangay of Valencia in Carcar City, one of the suspects set the vehicle on fire with Oberes inside, then pushed the vehicle into a ravine.

Garciano said he is willing to turn state witness once the case is filed in court./with reports from Benjie B. Talisic