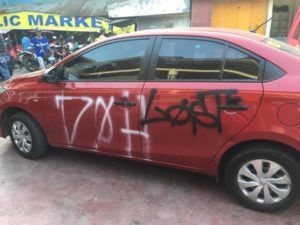 One of the seven vehicles vandalized by the three teenagers, two of whom were apprehended on early Saturday morning.
CONTRIBUTED/FRED LANZ FB PAGE

TWO teenagers, who went on a spray painting spree and vandalized several parked cars in Barangay Labangon, Cebu City on Saturday, were apprehended by barangay tanods.

The 14-year-old and 15-year-old boys were later turned over and placed under the custody of the police officers of the Punta Princesa Police Precinct, said Senior Insp. Ian Macatangay, Punta Police Precinct commander in an interview with Cebu Daily News.

Macatangay said that the tanods claimed that a third teenager managed to escape when they apprehended them for vandalizing several cars including a red Toyota Vios and a black Toyota Innova at 2 a.m. on Saturday.

Macatangay also said that the teenagers were already turned over to the Department of Social Welfare and Development (DSWD), but he had invited the parents of these kids on Monday.

The order to invite the parents was confirmed by Supt. Artemio Ricabo, Deputy City Director for Operations of the Cebu City Police Office.

Ricabo said that he ordered Macatangay to invite the parents to discuss about what their children did.

Macatangay said that they would discuss the implications and the possible liabilities of what their parents would have to shoulder.

He said these would include the possibility of them shouldering the costs of perhaps cleaning the vandalized vehicles.

Macatangay also said that they were verifying reports that the teenager that escaped was a member of the Alpha Kappa Rho (Akrho) fraternity.

But this was denied by an Akrho official.

Richard Buscaino, former national president and presently National Board of Trustee of Alpha Kappa Rho, said the teenager is not a member of their fraternity.

Buscaino even said that one of the owners of the cars that were vandalized was a fraternity friend.

“We are not tolerating this kind of act in our organization. If you are a member of Akrho, you also do not do this to your brother,” Buscaino said in Cebuano.

He said if we would identify, any person who would drag the name of our fraternity, then we would talk to them and tell them to stop dragging our name in their illegal activities.

Meanwhile, Macatangay is encouraging the communities to help stop vandalism in their areas.

He said that they would need their help by reporting these people to the authorities.

When sought for comment, Councilor Dave Tumulak, Deputy Mayor on Police Matters, said that the parents could be charged with child abuse in relation to the curfew ordinance.

The children, who were caught vandalizing the vehicles in Barangay Labangon, were caught at 3 a.m. and were violating the curfew ordinance of the city.

Tumulak encouraged the parents to look after their children, especially those who are involved in gangs.