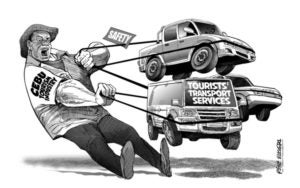 What does President Rodrigo Duterte’s threat to close Boracay and Cebu’s recent rash of tourist van accidents have in common?

Both came from a corrosive neglect and an unsettling complacency on the part of local governments and tourism industry stakeholders to continually care for the safety of our environment and our domestic and foreign guests.

In a speech during last Monday’s launching of the Malasakit Center in the Vicente Sotto Memorial Medical Center (VSMMC) in Cebu City, President Duterte was quoted as saying that he will charge the local officials of Boracay Island “with serious neglect of duty” for allowing businesses to set up resorts that overlap the coastline.

The President’s order also prompted the Department of Environment and Natural Resources (DENR) to require 51 establishments to set up their own wastewater treatment facilities or face closure.

True, the President’s scathing description of Boracay as a “cesspool” may have offended residents there but it was an effective wake up call not only on the local officials but also the residents and the DENR to do something concrete about the continuing pollution and degradation of Boracay’s environment.

Here in Cebu, in lieu of the President’s damning attacks, tourist industry stakeholders were greeted with a rash of tourist van accidents that initially claimed the lives of seven Filipino-American medical personnel in Alegria town last month.

The latest accident involved nine Chinese tourists whose service tourist van fell on its side towards a drainage canal on the road after the driver identified as Ciriaco Suson Jr. fell asleep at the wheel.

A Provincial Board (PB) investigation on the January accident involving the Filipino-American medical personnel showed a lack of coordination among booking agencies for trips in Cebu so the safety of the tourists visiting the province lies on the hands of service providers contracted by Manila travel agencies who may be unfamiliar or secured recommendation for these providers from those they consider to be reliable sources.

Whether or not it was only when that January tragedy occurred that the Cebu Alliance of Tour Operation Specialists (Catos) became vocal about the necessity for Manila-based and outside travel agencies to coordinate with them in hiring the best and most capable transport providers, one can never know.

What is important now is for the Cebu provincial government to strictly and continually monitor and require tourist van operators to comply with existing regulations that may or may not be enforced by the Department of Tourism (DOT) and transport agencies.

Let us not wait for more accidents to occur and a public dressing down from the President for us to ramp up on ensuring the safety and well being of our domestic and foreign guests.

Read Next
PhilHealth opens benefit package for children with disabilities