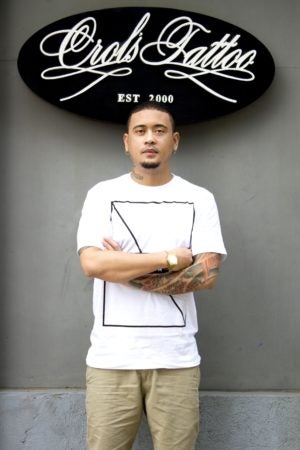 HERE’S the thing with Carlo Gabiana: Clients who go to him are virgins.

They have no clue what tattoo design should be inked on their skins.

And so when a tattoo artist is confronted with this crisis, he proceeds what every other artist do.

What  do you want to put out there and why?

“Tattoo is a self expression of who you are,” said Carlo in a sit-down interview in his studio, Crols  Tattoo, at 66-A M.P. Yap Street, Cebu City.

Once a subversive practice reserved for sailors and criminals, tattoos have secured  a solid place in 21st
century.

Step into a moden tattooo parlor and the first you’ll notice is the grade disinfectant, low buzzing sound of sophisticated tattoo machines, and Japanese-style art on the walls and a display of collector’s items.

What started off with neighbors and tricycle drivers, and then to actors Sid Lucero and Jennylyn Mercado, you could say the old stigma of being inked has gradually faded away.

We slowly begin to see it as visual representations of passions, of milestones —something personal.

As new clients turn to regular ones, he’s grateful to know that he must have done his art right.

And though some may still cringe at calling tattoo an art, Carlo is doing perfectly fine minding his own business.

A father, son, brother, love adviser to others’ brothers—Carlo literally wears his heart on his sleeve.

Now standing at the helm after two decades in the tattoo industry, he made himself the canvas, where pieces of him are written.

Behind the unspoken graphics, the abstract or shades of black, for Carlo, it is them, the inked, who are most sincere. (BHQ)

How did this all start?

I got my first tattoo when I was first year high school.

After that, it gave me the idea na, “Ah,ingon ani-on diay ni ang tattoo.”

I joined my first competition, “Pinatikay,” in 2007 here in Cebu and I won.

That was where it all started. After I won, my circle of tattoo artists grew bigger.

I met them and my knowledge widened. Daghan napod og offers such as a tattoo artist from Boracay who offered me to be their guest artist so I was there for a year.

When I got back, I worked for my friend, Ronnie of Ronnie’s Tattoo Bar.

That was my first official job as an artist.

Then later, I decided to have my own tattoo studio in my place. From there I get to have clients and where we live before, it has a small road that somehow resembles that of a ghetto.

There was no parking, and I was kind of apprehensive to have a shop of my own.

Unlike now when tattoo has already become mainstream, before it was kind of underground.

When clients began to pour in, I had to really open a shop here in the city.

That was 2010 when I had my first shop in Escario at the back of Golden Peak Hotel.

I had the shop for six years there but eventually, the place had to be sold so I’m here I am now and it’s been for four years already.

Were you always into art when you were younger?

I got this from my father 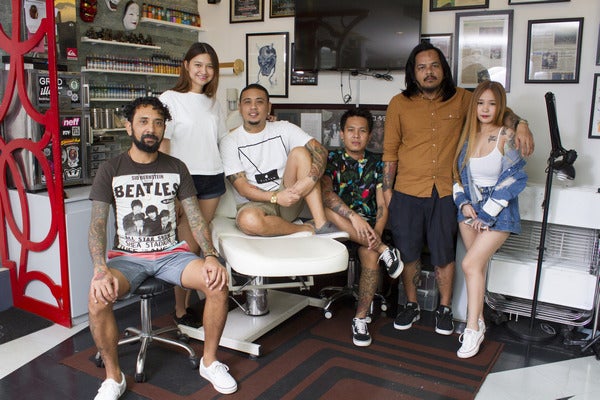 Carlo and his posse

What was your mom’s say when you ventured as a tattoo artist?

But later on, they saw what I saw in tattoo.

It’s an art, a form of self-expression so hinay-hinay na sila’g support nako.

Labi na makita nila that I’m earning from it.

What are your thoughts on the common misconception against inked individuals?

I experienced a lot of cases like that, especially katong akong mga nauyab sauna.

The first time I met their parents,

I got raised eyebrows. I’ve been tattooing for almost 20 years. Naanad na kaayo ko ana. So what I do with that, I speak with the person.

Let people get to know you more.

If you’re being judged, don’t get angry.

Eventually, people will see beyond your tattooed skin.

Define your kind of art.

It’s a self-expression  of who you are.

That’s why I always ask my clients why they want a particular design. I also get clients who let me decide on their tattoo.

I don’t do that. Maybe time would come when you’ll blame me for the design. That’s why I must have inputs and ideas.

From there I will execute and together we can make it a good tattoo art.

I just need a reference and I will take care of  the rest.

A tattoo has to speak about yourself.

This is Beavis and Butthead, then gipun-an lang.

Importante makapatik lang. (Laughs).
This one here is my daughter Kate.

This one here is a flower of life with the initial K in Chinese; a symbol for my daughter.

And here are my mom and dad—koi.

What are the challenges of a tattoo artist?

But, personally, I think competition is good.

Back when there were only a few of us, I tend to be relaxed, don’t push myself to be better.

Now that there’s competition, tattoo artists need to step up. Like wWhen I see that a fellow artist has a better work than mine, I am pushed to work
better at my craft.

One must upgrade his tools.

Others are contented already because anyway they continue to earn money, which is bati. Dapat gyud ka mo-upgrade.

Same as being a photographer.

If there’s a much better new tool, then get it.

It’s true that talent matters, but if you have good talent, mas nindot pa gyud kung naa kay good tools to complement it.

Also, the problem in the tattoo industry is that artists come and go.

Once the artist feels he can already start his own studio, he will eventually leave.

You can’t stop that, and that’s okay.

You need to create your own trademark so when people see your work, they can say—this is Carlo’s.

And what’s the Carlo Gabiana trademark?

People know me here as someone who’s into Japanese artwork like kois and dragons.

In due time you will realize what your trademark is.

The problem is if you don’t get your so-called trademark in five years, when it takes a lot longer than that.

Are you saying the artist will have to undergo a lot of designs before he finds his trademark?

Tattoo art is a never-ending progression.

New designs and styles are introduced every year, so don’t get left behind.

Explore until you find which art really speaks to you.

So how did you arrive at Japanese art?

I used to frequent Japan, and somehow I experienced their culture.

How do you improve yourself?

I love to read.

I try to learn its roots, the history of their art.

The more you know, the easier it is for you to execute the images in the right manner.

You’ve been in the tattoo industry for some time.

They don’t think of what a tattoo looks like in the long run.

So another thing I ask my clients are the sizes and the placement.

If you see that most of your clients are returning clients, that means sakto imong gibuhat.

This industry has a growing following, but the question is—do you have a lot of returning clients?

The tattoo industry is powered by word of mouth. People literally wear your works of art.

Tell us about your beginnings as a tattoo artist?

Sa una pa, the band scene here in Cebu was not scared to have tattoos, and karon there’s that awareness nga there’s nothing wrong about it.

Some doctors and professionals are already into it.

My point is that we are trying to upgrade the standards in the industry.

What are some things =you need to consider before working on a tattoo?

Let’s say you have the face of a woman, from the side view.

The proper placement is if placed on the right side, it should be facing inside.

It would be quite off to have it facing outside.

You need to consider the muscles, and where to place the design, so when you move, it doesn’t look awkward.

So I prefer to discuss thedesigns with the client here in the studio kay daghan ko’g i-explain.

A tattoo is something permanent so we need to be 100 percent sure.

Did you see yourself as a tattoo artist long before all this came to be?

I took up Architecture, and I guess I saw myself as a tattoo artist; but I didn’t expect I would reach the point of running my own business.

I didn’t exactly push myself.

I simply did what I loved most until I realized what I have already achieved.

What’s next for you?

One of my dreams is to have a tattoo studio outside the country, like in the US.

If that happens, the studio here will still be here.

Right now, I travel a lot. I got an offer from Melbourne to be a guest artist there, or even work there for good, pero dili ko.

What to you makes a good tattoo?

To me, a good and meaningful design should be that of a portrait.

I once had a client, and I will never ever forget this story.

I did the tattoo portrait of a kid who died of cancer.

The tattoo was on the guy’s chest, and right after, he just cried.

I felt so privileged and I personally thanked that guy for giving meaning to what I was doing.

For those who want to be a tattoo artist, ask yourself if you really want it because this is not a matter of going with the trend.

If your aim is simply to be popular, forget it.

Getting there takes a lot years and a lot of work.

There will be a time when you don’t have clients and sooner or later you are bound to get discouraged.

Dira gyud makita imong dedication You have to love the craft— every bit of hard work and hard times that come with it.

By: Dana Cruz
Faces of Cebu People and Ideas