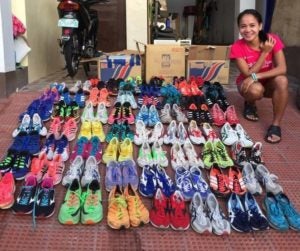 Cebuana Olympian Joy Tabal shows off the shoes donated by her friends and trainers at NSSU in Japan.
contributed

DESERVING runners of Mary Joy Tabal’s grassroots training program under JPD coaching will be the beneficiaries of the shoes that were donated by the Nippon Sports Science University (NSSU) in Yokohama, Japan.

The blessings from her trainers at NSSU arrived a day after Tabal clinched her sixth 21-kilometer title in the SM2SM Run on Sunday.

NSSU donated 55 pairs of used shoes that are still in good condition. It will be distributed to deserving runners of her grassroots training program.

“We will give it to our grassroots elite [runners] who are consistent with their performances based on the races that they have joined,” the 28-year-old Tabal told Cebu Daily News.

Tabal has created a good relationship with the elite female marathoners and coaches at the NSSU after she spent a month training in Japan in 2016 before her stint in the Rio de Janeiro Olympics the same year.

Tabal, who won a gold medal in women’s marathon in last year’s Southeast Asian (SEA) Games in Kuala Lumpur, Malaysia, said this is the first time she and JPD coaching received donation from abroad.

Currently, JPD coaching, which is headed by her trainer John Philip Dueñas, is handling around a thousand less fortunate kids from her hometown in Barangay Guba, Cebu City, from Liloan town, north Cebu, and from the Sisters of Mary Boystown and Girlstown schools.

“In behalf of JPD grassroots team, we are very grateful for the donation because we know this will inspire more kids to train and compete,” Tabal said.

“And for our part as founders and trainers of this program, it inspires us to reach out to more kids. Thank you to my NSSU family because they have never forgotten me and this advocacy.”

Tabal already had several charitable activities for her grassroots training program in the past years. She staged a running event in 2016 dubbed “Chairs For Joy,” which aimed at donating school chairs to her alma mater, the Guba Elementary School.

Meanwhile, Tabal revealed that she was contacted by a major television network on Sunday for a proposed life story of the Cebuana runner in one of its primetime drama shows every weekend.

Tabal did not disclose any more information about the planned depiction of her life story since it is still in the planning stage.