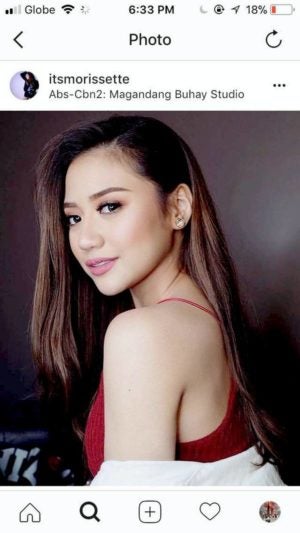 In a series of Instagram posts, Regine praised the 21-year-old who staged her first solo concert called “Morisette is Made” at the Smart Araneta Coliseum last Feb. 20.

“Congratulations my sweetheart you are simply amazing!!!!!! #hailtothenewqueen @itsmorisette,” Regine said as she shared a video during the concert.

In another Instagram post, she shared a photo of Amon onstage and said, “The Philippines has produced another star!!!! @itsmorisette.”

After the performance, the Songbird told Amon, “You are incredible. Grabe kasi parang natutuwa ako na you just waited. You waited for your turn.
And now this is your turn. I just wanna say, I think we have produced another super star. You are one of the best, if not the best.”

Amon joined the first season of “The Voice of the Philippines” in 2013, where she was part of Popstar Royalty Sarah Geronimo’s team.

Amon, who’s from Minglanilla, Cebu, is part of the ASAP’s Birit Queens every Sunday on ABS-CBN.

She also represented the country last year at the Asia Song Festival in South Korea.