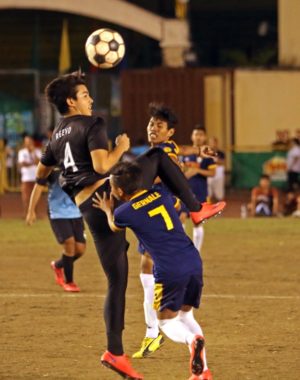 The Don Bosco Alumni Lost Boys clinched the Men’s Open title via a 4-3 win over the BRO Nationals in a penalty shootout late Sunday that capped the three-day 15th Thirsty Football Cup at the Cebu City Sports Center.

The last time that the DB Alumni got hold of the Men’s Open title in this event was six years ago when it defeated in 2013 the BRO-ERCO team that boasted of former Azkals Chieffy Caligdong and Ian Araneta in its lineup.

The DB Alumni Lost Boys is manned by players of Batch 2011 who were consistently ruling tournaments back in their secondary years including the Central Visayas Regional Athletic Association Meets and the Palarong Pambansa.

DB goalkeeper Leonard Francis Tan was named Most Valuable Player as he was the hero of the match when he foiled the last attempt of BRO Nationals with the score standing at 3-all.

Miguel Caindec sealed the win for the DB Alumni Lost Boys when his attempt found the back of the net.

A free-for-all almost broke out in the quarterfinals between BRO Nationals and Leylam C.

An exchange between Henderson Campo, the BRO Nationals’ goalie, and Ene Famous of Leylam C had members of Leylam A joining in the fracas.

Famous allegedly back kicked Campo, who retaliated with a hard tap on Famous shoulder. Famous turned around and allegedly punched Campo.

Famous’ teammates from their A team who were watching in the sidelines following their 0-1 loss to USP Qualfon joined and also allegedly punched Campo.

Organizers had to clear pitch three and the match was restarted on pitch two.

The tournament then continued with no further hitches and ended just a few minutes before midnight.

Earlier in the quarterfinals round, Suzuki Ciaz also protested when organizers forced the team to forfeit its match against Leylam because it only had six players.

Organizers explained that they had allowed six players on the first day of competition but no longer on the succeeding days.

There was also a slight disturbance in the match between DB Alumni Lost Boys and Loyals FC, which was halted with the referee red carding a booter from the Loyals FC.

Read Next
Cebu gets glimpse of next gen jeepneys