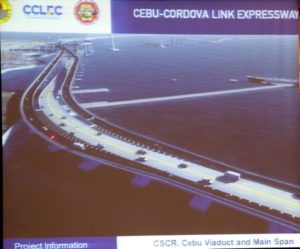 CEBU-CORDOVA BRIDGE. A perspective of the P22-billion 8.5-kilometer Cebu-Cordova Link Expressway (CCLEX) is presented during the meeting of the infrastructure development committee of the Regional Development Council in Central Visayas (RDC 7) in Cebu City on Feb. 28, 2018. CDN PHOTO/JUNJIE MENDOZA

STARTING today, the city government of Cebu will begin receiving the P99.4 million in rental fees from Cebu Link Joint Venture (CLJV) for the use of its South Road Properties (SRP) lots as the staging point for its Cebu-Cordova Link Expressway (CCLEX) project.

Aside from the rent, which will cover a period of nearly four years, or from March 2018 to December 2021, City Hall will get additional benefits because all the permanent improvements that will be put in the SRP lots by CLJV, the construction and engineering consortium overseeing the CCLEX, will be donated to the local government unit of Cebu City after the completion of the Cebu-Cordova bridge, said Allan Alfon, the president and general manager of the Cebu Cordova Link Expressway Corporation (CCLEC).

“It will be a significant help to the success of the CCLEX because it will expedite the completion of our P30-billion project. The sooner we can finish the bridge, the better for the Cebuanos and all the commuters in general,” Alfon said in a statement sent to Cebu Daily News on Wednesday.

The Cebu City Council, during its regular session last Feb. 13, authorized Mayor Tomas Osmeña, on behalf of the city government, to enter into a contract of lease with CLJV. The agreement will cover 57,170 square meters of land and another 1,500 sq.m. area that is the jetty of SRP.

Under the agreement, CLJV will improve the existing jetty from 1,500 sq.m. to 25,000 sq.m. to accommodate more barges, which will be the main transportation to be used during construction.

Councilor Eugenio Gabuya, who sponsored the resolution authorizing Osmeña to enter the contract with CLJV, said improvement to the jetty will provide more benefit than the rental since it will continue to be of use to the city government after the rental agreement has ended.

The leased property will be used as the staging area for the construction and support services for the project which includes parking spaces for heavy and light equipment, barracks, temporary dump site of construction debris, temporary storage area, site for the powerhouse and water tank among others.

CLJV is a construction and engineering consortium formed by the Consunji, Lopez and Spain-based Acciona Construccion S.A. that bagged the P22.6-billion design and build contract for Metro Pacific group’s 8.5-kilometer bridge project that will connect Cebu City to the Municipality of Cordova in the island of Mactan. CCLEC, which awarded the project to CLJV, is a subsidiary of Metro Pacific Tollways Corp. (MPTC), the tollroad arm of Metro Pacific. CCLEC will build, operate and maintain the toll bridge through a joint venture agreement with the local governments of Cebu City and Cordova Municipality.

CCLEX, which is targeted to be completed by 2020, is the first of MPTC’s envisioned toll road expansion projects in Visayas and Mindanao. with INQUIRER.NET

Read Next
Time to move up? Nietes says there’s ‘no challenge’ in flyweight anymore