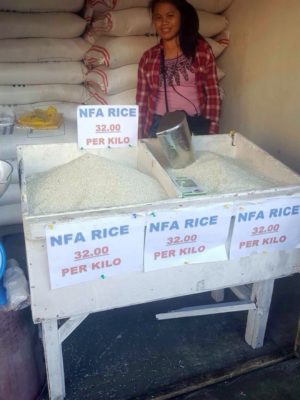 NFA RICE: The samples of poor quality rice supplied by the National Food Authority in Central Visayas (NFA-7) to rice retailers that are now being sold at the Carbon Public Market in Cebu City. The photo is from Erwin Gok-ong, president of Grain Retailers Confederation of the Philippines (GreCon) Cebu City North District.

RICE Retailers have complained about the poor quality of rice they purchased from the National Food Authority Central Visayas (NFA-7) office.

Erwin Gok-ong, president of the Grain Retailers Confederation of the Philippines (GreCon) Cebu City North District, said that only nine bags of the 100 bags of NFA rice they have bought on Tuesday had been sold as of yesterday. “Bati kaayo ang bugas sa NFA nga ilang gi release sa amoa (The NFA rice they released to us was of poor quality),” he told Cebu Daily News in a text message.

Despite the strategic location of their members’ outlets in Carbon Public Market and the tarpaulins they installed to inform the consumers of the return of NFA rice, business was slow compared to their previous sales.

“Ang amo lang kon ilang gipagawas nganong tagaan man mi og bati (Our point is , why did they decide to release to us a supply when they know it was of such poor quality),” said Gok-Ong, who has been a rice retailer since the 1980s.

The grains were darker than the ordinary rice and were yellowish in color while the sacks they were stored in were dusty, Gok-ong said.

Another rice retailer operating in Taboan Public Market, Cenon Bacus, affirmed the poor quality of NFA rice, added that he now has fewer customers, unlike in the past when consumers would line up in his outlet to buy the cheaper rice.

He said he still had 29 bags of rice left from the 50 bags he bought early this week from NFA-Central Visayas.

Bacus, who is also a councilman of Barangay San Nicolas, Cebu City, said he used to be able to sell 10 50-kilogram sacks of NFA rice per day.

He said the sale of NFA rice was however also expected to be slower since they had stopped selling NFA rice last month and consumers might now be aware that NFA rice has returned to the market.

The NFA rice the retailers purchased well-milled rice with 15 percent broken that were sold for P32 per kilo.

Gok-ong said they had no choice but to continue selling their remaining NFA rice supply to recoup their investment.

When sought for comment, NFA-7 Information Officer Olma Bayno declined to comment, pointing to the gag order issued by President Rodrigo Duterte against the NFA head, barring him from discussing in public the country’s rice situation.

NFA Administrator Jason Aquino was earlier blamed by lawmakers for saying there was a shortage in NFA rice, causing panic among consumers and raising prices. Aquino had said he was just being transparent. NFA-7 Assistant Regional Director Yolanda Navarro said in a previous interview that they have resumed selling NFA rice to retailers since Monday, before their at least 15,908 bags buffer stock, which was intended for calamities, starts to deteriorate after six months in the storage.

She said they needed to dispose of their bugger NFA rice stock as it would already be six months since it was acquired via importation in October 2017.

“Ang bigas hindi mo kayang patagalin (We cannot keep the rice for long). So we have to dispose it and replenish it and palitan ng bagong (replace it with a) inventory,” Navarro had said.

She said they also wanted to address the demand of consumers for cheaper rice.

The NFA rice are now available in 11 major markets or about 92 outlets in Metro Cebu.

In Cebu City, NFA rice can be bought to accredited retailers in T. Padilla, Taboan, Freedom Park and Carbon Public Market. Public markets in the town of Consolacion and the cities of Mandaue, Lapu-Lapu, Toledo, Carcar, Danao, and Talisay are now also selling NFA rice.

After the NFA rice stock are completely disposed, Navarro hoped they could buy palay (unmilled rice) from local farmers while waiting for the arrival in June of 250, 000 metric tons of imported rice.

Read Next
TF Ungab has sketch of suspect