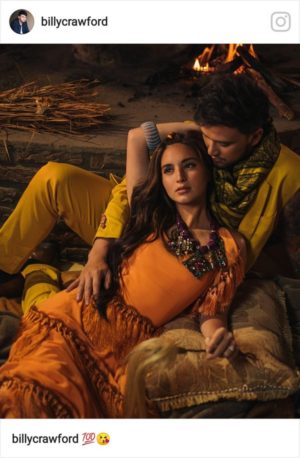 The first photo he reposted was that of his floral suit and a netizen’s mom with a bag of the same cloth. He captioned the post with “Good night y’all.”

Another photo he uploaded was that of a sofa cover also with the same floral cloth.

Crawford also posted a photo of Garcia in a paisley printed yellow/black/white gown and that of a pillowcase and a bag of the same cloth.
“Ika6natela,” he said.

No less than Asia’s Songbird Regine Velasquez-Alcasid joined in, posting a photo of her hugging a pillowcase made of the same floral as that of Crawford’s suit.

Meanwhile, Kapamilya actress Jessy Mendiola defended Crawford and Garcia from those making fun of their outfits.

Crawford and Garcia’s pictorial courted controversy after some photos of the shoot showed them posing with Ethiopian women and children.
Netizens slammed the couple and accused them of being racist and culturally insensitive.

The couple issued a statement via the Twitter account of ABS-CBN journalist MJ Felipe to apologize for offending people, saying it was not their intention to “disrespect any race or culture.”

Crawford said the trip was sponsored by Ethiopian Airlines to promote tourism in their country.

Garcia and Crawford got engaged in 2016 and are set to marry this year.