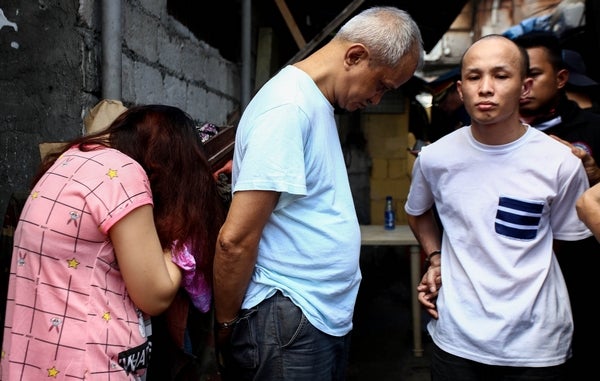 Father and son Ricardo De Luna and Richard De Luna and neighbor Marian Dacua were arrested at a raid conducted by the District Drug Enforcement Unit (DDEU) of the Quezon City Police District at Matahimik Street, Teachers Village, Quezon City. At least P75,000 worth of shabu, drug paraphernalia and a firearm pistol were recovered during the raid. /Inquirer photo

Senator Bam Aquino on Tuesday slammed the dismissal of illegal drugs charges against Cebu businessman and self-confessed drug trafficker Kerwin Espinosa as proof that the war on drugs only targets the poor.

In a resolution dated on December 20, 2017, the Department of Justice (DOJ) dismissed the cases filed against Lim, Espinosa, and 20 others.

The senator also questioned the value of the ongoing war on drugs if the alleged sources of drugs are set free.

Last January, the government revived its “Oplan Tokhang” campaign against illegal drugs after it was suspended following criticism over the high number of alleged drug personalities killed in police operations.

Rich and poor are equal targets

President Duterte had said that he could not spare the poor from his anti-illegal drugs campaign because that would be a form of selective justice and against the law.

Thousands of people, most of them in impoverished communities, have been killed since Mr. Duterte launched his war on drugs after taking office in 2016.

“So if you are poor, I cannot do anything and say, ‘I will not arrest you, I will not kill you because you are poor’ — that would be selective justice,” the President said in a speech last January at the 60th birthday celebration of Speaker Pantaleon Alvarez.

The President said he had been accused of targeting just the poor. “And worse, they say, ‘Duterte only kills the poor,’” he lamented.

But he said the law was very clear. “I cannot say that this law is only for the rich but not for the poor,” he said.

Justifying the inclusion of the poor among targets in the war on drugs, Mr. Duterte said “[t]he act of one is the act of all because it is a conspiracy. That is the law.”

“And my oath of office says that I have to enforce the law against everybody who violates the law,” he added.