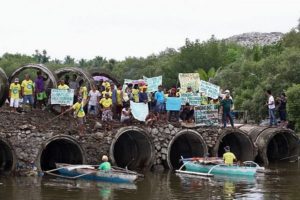 The proposed Inayawan access road will connect to this culvert bridge at the South Road Properties (SRP). Fishermen from Barangays Cogon Pardo, Mambaling and Pasil opposed the bridge’s construction because it prevented their bancas from passing through to the waters off Talisay City where they fish.
CDN file photo

Engineer Josefa Ylanan, head of the Office of the Building Officials (OBO), said they also needed to check on the condition of the existing causeway at the South Road Properties (SRP) that will connect to the planned access road.

Ylanan said the causeway road connects to a culvert bridge that was used before as shortcut for garbage trucks that are going to and coming from the Inayawan Sanitary Landfill.

“The road, currently, is not intended for all types of vehicles, especially those carrying passengers,” she said in an interview on Friday.

The planned road opening is also expected to reduce congestion from along the national highway where there is an ongoing construction of the P638-million underpass project.

Ylanan said they will determine during their inspection what improvements are needed to make the road safe for use.

Garganera said the road opening project may be funded from the P14 million which the council approved in 2017 for the rehabilitation of the SRP access road that will connect to the Inayawan White Road.

“If I remember it right, there’s already a budget appropriated for the rehabilitation and strengthening (of) that road up to the bridge and also for the concreting of the road going to SRP and Filinvest (area). I think it’s around P14 million,” he said.

However, Garganera and Alcover share the sentiment that the plan should have been thought of prior to the start of the underpass project.

He added that Team Rama councilors Edu Rama and Jocelyn Pesquera earlier proposed the widening roads and the opening of alternative routes prior to the start of the underpass project, but their proposals were ignored.