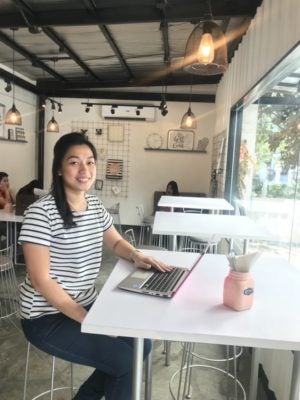 Kimberly Pato says she is hands on in her one-year-old Krave Cafe business, along Salinas Drive in Barangay Lahug. contributed photo

It took a practicum and several years in the corporate jungle for 26-year-old Kimberly Pato to realize she could live off of her passion in baking.

Growing up, she recalled enjoying seeing her mom and their relatives bake during special occasions like Christmas and would sometimes help them out.

The love grew little by little until she began joining cooking classes in school, received kiddie cookbooks as gifts and skimming through her grandmother’s old collection of recipe books. Eventually, when she was old enough to bake on her own, she began experimenting to add her own touch in what she does.

“I’d like to think of myself as a homemade baker because I learned, still learn and try out recipes and techniques from books, internet, travels and my critiques and I just tweak them to my liking,” she said.

Now, Pato owns and manages Krave Cafe, which is celebrating its first anniversary this month. The cafe, which is located along Salinas Drive in Barangay Lahug, opened in March 2017.

Pato had invested around P1 million in putting up Krave Cafe, which she started conceptualizing in 2015.

A graduate of BSBA Major in Marketing Management and Entrepreneurship at the University of San Carlos (USC), Pato said the idea of Krave Cafe started forming when towards the end of her studies, they were required to put up their own business as a practicum.

She and her groupmates then formed The Cupcakery, selling specialty cupcakes and joining bazaars to gain exposure.

Being a “homemade baker,” Pato said it was a no-brainer that their group pursue baking products for their project.

It eventually became one of the biggest and most successful business ventures in their batch that Pato made a promise to herself and to her mentors that she will pursue baking as a business, equipped with her formal learning in business school.

“Yet, I also wanted to give the corporate life a shot so the passion project was eventually put on hold for a few years until the opportunity came for Krave to materialize and evolve into what it is today,” Pato said.

For four years, she found herself in the tough corporate world. But in the end, her long-time passion grew too huge for it to be set aside, and she decided to make Krave Cafe a reality.

“It’s named Krave so as not to limit us from serving just cupcakes and allow us to create and satisfy both sweet and savory kravings, and apparently spelled with a K in my name’s sake,” she said.

The cafe itself is a container-van inspired semi-industrial space with a personal and homey touch.

Pato said she wanted the design to be simple and not intimidating in order to open its doors to customers of all ages. A color scheme of black and white dominates the interiors of the cafe with a hint of shades of pink.

Instead of a coffee shop, the cafe exudes more of a pastry and breakfast place which are the highlight of the entire Krave Cafe experience — food that are made from scratch inside the shop.
Among their bestsellers are homemade pancakes like their S’mores and Cinnamon roll variants. They also have Red Velvet and Chocolate Chip.

The cafe can comfortably seat up to 25 customers.

Krave Cafe is located near a big university. Its target market are the B and C classes with mostly students and some tourists.

Krave currently has five employees which leaves Pato still very hands on in its operations from admin, finance, marketing, purchasing and operations.
This is why for now, even after a year of operation, Pato still has no plans of expansion.